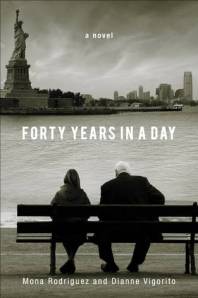 Hello Mona! I read Forty Years In A Day and was absolutely intrigued with your story. Could you please tell your audience about your book?

Mona: Thank you, Stephanie, for hosting us today. It’s a pleasure. Our story begins in Italy, 1900. After years of torment and neglect, Victoria and her four small children immigrate to Hell’s Kitchen, New York, to escape her alcoholic, abusive husband. On the day they leave, he tragically dies, but she does not learn of his death for several years—a secret that puts many lives on hold.

Quickly, they realize America’s streets are not paved with gold, and the limits of human faith and stamina are tested time and time again. Poverty, illness, death, kidnapping, and the reign of organized crime are just some of the crosses they bear.

Victoria’s eldest son, Vincenzo, is the sole surviving member of the family and shares a gut-wrenching account of their lives with his daughter during a visit to Ellis Island on his ninetieth birthday. He explains how the lives of he and his siblings have been secretly intertwined with an infamous Irish mob boss and ends his unsettling disclosure with a monumental request that leaves Clare speechless.

The story takes the Montanaro family through several decades, providing the reader an opportunity to stand in the shoes of a past generation and walk in search of their hopes and dreams. It is layered with the struggles and successes of each family member, illuminating the fact that human emotions have been the same throughout generations; the difference is how people are molded and maneuvered by the times and their situations.

Stephanie: Is this story based on anyone you know or who you have come across?

Mona: The characters are based on family members, both deceased and living. I’ve had this particular story churning in my head for many years, sparked by the stories of my family’s past. Forty Years In A Day begins in 1900 and follows the incredible journey of a young mother and her four children as they escape from Italy into the streets of Hell’s Kitchen, New York. That woman was my grandmother. The story ends with a woman who knows the father of her children is living a double life with another, but she loves him so much that she overlooks the arrangement rather than forfeit the man. Those were my parents. In between are the stories that I had heard from family members, intertwined with a twist of fiction and sensationalism to have some fun.

Stephanie:  Were there any challenges you faced while writing this story?

Mona: There were many challenges that I had faced undertaking this project. First and foremost, I had the idea of the story in my head before I had the skills to share it. I’m a mathematician and an environmentalist so this challenged the other side of my brain. While writing is something I always admired, to me, the passion was in the story and the writing was the vessel to get it told.

Second, people ask me how much of our book is realistic; especially family members who want to know if this is the actual story of what had happened. They try to draw a parallel between family members’ personalities and our characters’ personalities. The truth is that no one can totally piece together that puzzle of tales; there are parts to every family’s story that were pushed under the rug for fear it would tarnish the family’s reputation. The elders think they are doing their family justice by taking some of the more scandalous stories with them to the grave. When, as a writer, you realize all this, you are forced to conjure your own conclusions from the pieces of stories that you gather.

Third, I coauthored the book with my cousin Dianne Vigorito. She gave me the support and validation I needed to pursue this project. I was lucky to find a family member to work with, and she had an immediate interest in the idea. She grew up hearing the same crazy stories, some of which were almost unbelievable, that were told by our ancestors.  Working with another has taught me the power of more than one and the art of compromise.

Stephanie: Was there a particular scene you felt difficult to write?

Mona: The story of Vinny and Ava represents my parent’s story and the story that resonates closest to my heart. When they were alive, I had discovered secrets about their past that they didn’t want my siblings and me to know. When they died, I felt more compelled to delve into their past, but no one could (or would) tell me the whole story. I realized that I should have asked more questions when they were alive, been more adamant to learn the truth. I questioned aunts and uncles, but I sensed there were bits of their lives, and everyone’s in our story, that would never be unearthed. The story of Vinny and Ava is conjured from the pieces of stories I had put together, and my interpretation, especially emotionally, of what had happened between my parents.

Stephanie: What was the inspiration for your story?

Mona: We don’t realize what our ancestors went through to make life better for themselves and for us. What they faced was incredible—the living conditions, poverty, disease—and their work ethic was admirable. Although I had started with the intention of writing a story about my father’s family, it turned into a novel. There was so much more I wanted people to know about this fascinating era.

Stephanie How long did it take to write, Forty Years In A Day?

Mona: I started by writing down the stories I had heard and interviewing the elders that were still alive. It took seven years—researching, attending seminars, workshops, conferences, and reading everything from books on how to write dialogue to reading mainstream fiction and rereading classics. I also studied the history and lifestyles of the era.  Dianne and I worked on our own, and we also worked together several days a week, collaborating, rewriting, and editing. I had a story to tell and I knew it had to be told.

Stephanie: You did a fantastic job with your research. It’s truly a beautiful and thought provoking story. And I believe it’s written in such a way that the story transcends you into that period and gives you a wonderful picture of the human conditions.

Is there a sentiment you hope readers come away with after reading your story?

Mona: Forty Years In A Day is more than an immigration story about an Italian family; it epitomizes the immigration experience and coming to America in the early 1900s. It reignites curiosity and admiration for what our ancestors had endured and accomplished to make our lives better. There are many themes that run throughout the story—the loss and rebound of hope, honesty, perseverance, forgiveness, survival, the list goes on—but I think the main theme is the importance of family. Forty Years In A Day also reminds us that every family has hidden secrets and that the choices one person makes echoes through generations.

Stephanie: The different themes in your story was well written and I felt that some of them hit home with me. Your story has given me a lot to think about. Especially about family and relationships.

Is there a character that you feel connected to in any way?

Mona: I have a connection to all the characters, but the one I admire the most is Victoria. She was an amazing woman who wanted to do the right thing for her children. Without giving away the story, I often wonder how she summoned the strength to do what she did, and if I would have been so courageous. She did it not so much for herself, but for her children. She was the ultimate mother.

Stephanie: I admired Victoria as well. She certainly pulled at my heart strings. What book project is up next for both?

Mona: There are six cousins at the end of our story. The idea is to take that next generation into the next era.

Stephanie: Ooo…I’m really looking forward to reading your next book! What advice would you give to an aspiring author?

Mona: Read the works of authors you enjoy and respect, study and practice the craft, and try to develop a personal style and formula for success.  When reading a diverse collection of books, you take away, along with the story, a little of each author’s craft.

Mona Rodriguez coauthored Forty Years in a Day with her cousin Dianne Vigorito.
Throughout their lives, they had heard many stories from family members that
were fascinating, sometimes even unbelievable, and decided to piece together
the puzzle of tales. Through research and interviews, their goal was to create
a fictional story that follows a family through several decades, providing the
reader an opportunity to stand in the shoes of a past generation and walk in
search of their hopes and dreams. What they realize in the process is that
human emotions have been the same throughout generations – the difference is
how people are molded and maneuvered by the times and their situations.

Mona Rodriguez has her MS in environmental Management from Montclair State
University. She is presently a trustee on the board of directors of a nonprofit
foundation created to benefit a local public library and community. She lives
with their husband in New Jersey, and they have two grown sons.