Kaylene Johnson is a professional writer and long-time Alaskan who lives in Eagle River, Alaska. She has written five books about Alaska and the people who live there including her memoir A Tender Distance: Adventures Raising My Sons in Alaska.  Her award winning articles have appeared in Alaska magazine, the Los Angeles Times, Spirit magazine, Parish Teacher. Winner of the B.R.A.G. Medallion for her book, Canyons and Ice. She holds a BA from Vermont College and an MFA in Writing from Spalding University in Louisville, Kentucky.

Stephanie: Hello Kaylene. Congrats on winning the BRAG Medallion and thank you for chatting with me today. I see that your book is non-fiction and I do enjoy reading in this genre. Please tell me about your book, Canyons and Ice.

Kaylene: Canyons and Ice is the biography of Dick Griffith, a legendary wilderness traveler who has traversed more than 6,000 miles across the continent alone and unassisted. He is also a pioneer of river rafting on the Colorado and Green Rivers long before rafting the Grand Canyon became a recreational pursuit. Until the book was published, most of his travels were unknown except to people who know him personally. He recently received a commendation from the Alaska State Legislature for embodying the spirit of adventure on the Last Frontier.

Stephanie: How amazing and inspiring!

How did you come upon this writing project?

Kaylene: I met Dick Griffith at a Sunday dinner at his house after someone suggested he and I meet. (I wrote another biography of a famous Alaskan.) When I saw his journals and diaries, I told him he MUST compile them into a book. The stories were riveting and the photos were captivating. Eventually he decided rather than edit his journals, I should write his biography in third person. It was a privilege and I thoroughly enjoyed the task. I describe our weekly meetings which took place over the course of a year as “Tuesdays with Morrie” meets “Into Thin Air.”

Stephanie: How fascinating and what an honor to be ask to write his biography. 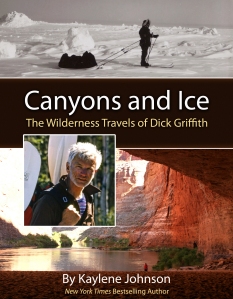 Griffiith must have had a substantial about of writing from his experience. How much of it was recorded?

Kaylene: He used a diary. He had more than 500 pages of typed, single-spaced journal entries from which to draw. I also interviewed him weekly as I wrote. I was fortunate to have this kind of access to my subject. I also interviewed people who knew him and researched the history of the times. He grew up in the Great Depression, an era that helped shape the person he would become.

Stephanie: Where there any challenges writing about his adventures?

Kaylene: Mark Twain wrote, “Biographies are but the clothes and buttons of the man. The biography itself cannot be written.”  Those words gave me courage when at times the task seemed overwhelming. I told myself that if I could not capture the essence of Dick Griffith, then I at least hoped to write the clothes and buttons that suited him.

Stephanie: Did you learn anything from writing your book and what was it?

Kaylene: I learned a great deal about independent-publishing and the amount of time it takes to get the word out, fulfill orders, and be a publicist and appointment secretary for a person who was suddenly in high demand as a speaker. That’s a great problem to have, of course. The book sold out of the first printing within six months of publication. More than a year later, Griffith continues a rigorous schedule of speaking engagements. Along with having walked and skied farther than possibly any person on earth, he is a self-effacing and entertaining speaker.

Stephanie: Did you have to do any traveling concerning your book?

Kaylene: Not specifically, but I fortunately had been to some of the places that Griffith traveled prior to writing the book, specifically the Brooks Range of Alaska. I had a keen appreciation for the remote beauty of the place and felt a kinship to the landscape that he so loves. One place I longed to see first-hand was the Grand Canyon from the viewpoint that Griffith saw back in the late 1940’s. I was fortunate enough to raft the Grand Canyon with Griffith himself this past October (2013). At 86 years of age, Griffith is the oldest living river runner on the Colorado River. We had a remarkable time as he narrated the places he and his late wife had explored along the way. With a cigar clenched between his teeth, Griffith was at the oars for most of the 226 miles of river that we rafted.

Stephanie: What are you expectations for this book?

Kaylene: My hope is that the book will find a wide reading audience and that Griffith’s amazing accomplishments would be recognized beyond circles of the outdoor adventure elite. Griffith is a remarkable man and his story is a testament to a person’s ability to push the limits of human possibility. He walked and skied all of those miles not for accolades or to achieve any kind of notoriety, but as a personal quest, a drive that he himself did not fully understand. His story is inspiring not only for his achievements but also for the ways in which he failed (sometimes spectacularly) only to return and try again.

Stephanie: What is your next book project?

Kaylene: I am finishing up a book about the Alaska Railroad in time for Anchorage Centennial Celebrations in 2015. I will start a new biography in 2014 about another Alaska pioneer with a different kind of story. (Stay tuned!)

Kaylene: I read about indieBRAG online.

Stephanie: Will you self-publish again?

Kaylene: Yes. I’ve learned so much and may as well put that learning to good use. I now have a number of distribution outlets in place for future publishing endeavors. Book publishing is undergoing big changes, and independent publishing is one of the biggest movements in the industry. In many ways, it has democratized publishing, allowing voices that might not otherwise be heard a chance at the podium. The challenge is to stand out in a sea of new work by new authors. That takes a commitment to excellence and determination to get the word out about one’s book. Many thanks to indieBRAG for choosing Canyons and Ice: The Wilderness Travels of Dick Griffith as an indieBRAG medallion winner!

Thank you for chatting with me today, Kaylene! It was a pleasure!!

We are delighted that Stephanie has chosen to interview Kaylene Johnson, who is the author of, Canyons and Ice, one of our medallion honorees at  www.bragmedallion.com . To be awarded a B.R.A.G. Medallion TM, a book must receive unanimous approval by a group of our readers. It is a daunting hurdle and it serves to reaffirm that a book such as, Canyons and Ice, merits the investment of a reader’s time and money.