Stephanie: Hello David! Thank you for chatting with me today and congrats on winning the B.R.A.G. Medallion. Please tell me about your book, Sarah’s Journey.

David: Sarah’s Journey is historical fiction based on true events. Sarah, born on Brown’s Island in the Ohio River by the Virginia panhandle [now West Virginia] was the daughter of her owner, Colonel Brown and his slave whose father was a white slave named Kinney and a black slave. At 16 Sarah marries a black man, Lewis, who says he is a free man and is hired by Col. Brown. She has two children by him. When col Brown dies, her husband is captured by bounty hunters and taken back into slavery in Kentucky. Sarah and her children are sold to a neighbor who is a cruel taskmaster. Sarah is taken advantage of by white men including her owner and has three white children, with whom she escapes through Ohio to Upper Canada in 1820 where slavery has been abolished. A young Scots entrepreneur falls in love with her and brings her to Simcoe where she has his child. Her life and the lives of her children in that community of freed and escaped slaves take her through tribulations, including the Duncombe Rebellion, to her death in 1862. Her son by the Scots entrepreneur becomes one of the richest men in New York City. 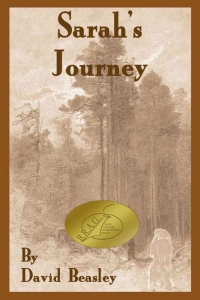 Stephanie: Many people are interested in this period of time in our American history. What inspired you to write your story?

David: I was inspired by the many aspects of slavery and freedom in the story. Sarah could pass for white and had three white children. Her black children had to be left behind but they escaped 18 years later on the underground railway, their conductor marrying Sarah’s black daughter and setting up a barbershop in Simcoe from where he could continue conducting escapees and fight bounty hunters. The relationships between the white and black communities, the loyalty of the blacks during the rebellion because of fears that American invasion would bring back slavery, the conflict among races in the mill town of Brantford, and the extraordinary success of Sarah’s youngest son, who being the son of a slave was a slave and had to hide his past.

Stephanie: I noticed this is considered, Literary Fiction. Was there any research involved? What are the factual events or people in your story?

David: The story is factual and most of the people are from real life, except for those who helped Sarah escape, who, of course, could not be revealed and whom I had to imagine. When the rich son died in an accident, curious New York lawyers discovered that he came from Simcoe and the affidavits and testimonies taken in Simcoe about the family were in the archives in the Norfolk county Museum across the street from my home. I went to West Virginia and found court records and interviewed descendants of Sarah’s owner. I also researched the history of the areas in Virginia, Upper Canada, and Simcoe.

Stephanie: Who designed your book cover?

David: I picked the illustration I wanted and my stepson Eric Rustan designed the cover.

Stephanie: What do you find most challenging about writing?

The hardest part of writing, according to Erskine Caldwell, is attaching the seat of the pants to the seat of the chair. I have written for so long that it is not a problem now. But most challenging is knowing what you want to write will not be accepted by a publisher. Of course one can find out what a publisher wants and write to his measure but that is not the mark of the artist, rather of the hired man.

Stephanie: What is your next book project and will you self-publish again?

David: I have three future projects in mind and presently writing my memoirs. Since I have self-published about 20 books, I shall probably continue the practice.

David: IndieBRAG discovered me, I think. Someone must have recommended Sarah’s Journey to it.

Stephanie: What is your favorite quote?

David: My favorite quote is a short poem by Ezra Pound:

Like a skein of loose silk blown against a wall
She walks by the railing of a path in Kensington Gardens
She is dying piecemeal of a sort of emotional anemia
Round about her are the filthy, unkillable infants of the very poor

They shall inherit the earth

And is almost afraid that
I will commit that indiscretion.

This is how I remember it. Pound gives one a hint of his meaning by the epigraph from the end of first line of a poem by the French Symbolist poet Albert Samain “. . . . en robe de parade.” The full line is “Mon ame est un enfant en robe de parade.” My soul is a child in a fancy-dress costume. Thus the artist’s soul.

David: Readers can buy my books from my website: www. davuspublishing.com in paper
or as an e-book, some of which are on kindle.

We are delighted that Stephanie has chosen to interview David Beasley, who is the author of, Sarah’s Journey, one of our medallion honorees at www.bragmedallion.com . To be awarded a B.R.A.G. Medallion TM, a book must receive unanimous approval by a group of our readers. It is a daunting hurdle and it serves to reaffirm that a book such as, Sarah’s Journey, merits the investment of a reader’s time and money.