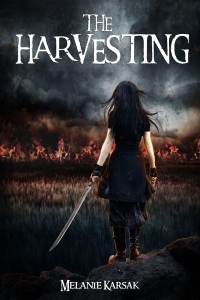 “The world, it seemed, had gone silent. It was something we knew but did not talk about. We were alone.”

While Layla Petrovich returns home to rural Hamletville after a desperate call from her psychic grandmother, she never could have anticipated the horror of what Grandma Petrovich has foreseen. The residents of Hamletville will need Layla’s cool head, fast blade and itchy trigger finger to survive the undead apocalypse that’s upon them. But even that may not be enough. With mankind silenced, it soon becomes apparent that we were never alone. As the beings living on the fringe seek power, Layla must find a way to protect the ones she loves or all humanity may be lost.

This exciting new dark fantasy/horror hybrid blends the best of the zombie genre with all the elements a fantasy reader loves!

It’s all fun and games until someone ends up undead!

Stephanie: Hello, Melanie! Thank you for chatting with me today and congrats on the B.R.A.G. Medallion. You have written a story in a genre that is seems to be all the rage right now. What sets your book apart from others?

Melanie: Thank you so much for having me today. I am so delighted to be a BRAG Medallion honouree and grateful to be asked to stop by to talk about my novel!

So what sets this book about from all those other zombie novels? Well, in The Harvesting, I wanted to consider what the death of humanity might mean if there were, in fact, other being living in our world. What if there really were vampires, and shape-shifters, and fey people . . . all the beings of folklore? If mankind died, what might the impact be on the unknown world that lives in tandem with us? As an academic, the symbolic nature of the zombie trend really intrigues me. I believe it speaks to an inner deadness we feel as a society. I started playing with how other being might symbolically represent other feelings and attitudes about our world. At the end of all this debating and thinking, I ended up with The Harvesting.

Stephanie: Really interesting…I have to admit I’m not into the whole folklore of Vampires fey people and Zombies but your idea to explore a world where they actually live with us is intriguing.

Please tell me about Layla. What are her goals and the conflict she faces?

Melanie: Layla is interesting. Abandoned by her mother, she was raised by a psychic grandmother who was the town’s resident medium, oddball, and “witch.” Layla always felt a bit ostracized as a child. While she did have a very passionate first love (with Ian), she ran away from Hamletville as soon as she could to better herself—education, a career, life in Washington DC. The end of humanity finds her returning to Hamletville, a place she’d rather not visit. In the wake of the zombie apocalypse, she finds herself reunited with her first love, Ian, but slowly begins to understand she is not the same girl who once loved this hometown boy . . . Ian’s brother Jamie, however, is an entirely different story. Of course, Layla also has to face zombies, and vampires, and her budding psychic ability. Most of all, Layla has to learn how to trust the right people. This is a major struggle for her.

Stephanie: Layla sounds like a fascinating character that I think many can relate to.

Is rural Hamletville a real place?

Melanie: Hamletville is my play on words; I was trying to describe the smallest of small towns. The town, however, is inspired by an amalgam of my hometown (a very Hamletville kind of place), Tidioute, PA as well as North East, PA where I worked.

Stephanie: Small towns are always cool to use in stories…

What is Layla’s occupation in this story and how did she learn to use the weapons she wields?

Melanie: Layla picked up a sword at a young age and fell in love. She learned fencing and went on to study the ancient art, becoming a state champion. She studied medieval history in college and is working at the Smithsonian in Washington DC at the beginning of this book. I took fencing as a student at Penn State, and the experience always stuck with me. A reviewer called Layla pretentious because of her esoteric education and skills, but it is those university-born skills that allow her to become a great leader during this catastrophic event.

Stephanie: Is this a stand-alone story or will there be others?

Melanie: I am planning to release The Shadow Aspect, the second novel in this series, in the summer of 2014. There will also be a Harvesting Series novella, Midway, that will release this summer. The novel will conclude with a third book titled The Green World, which will release in late fall 2014 or 2015.

Stephanie: How does your title tie into the story?

Melanie: Layla has a dream in the novel where the figure of a grim reaper takes her to a graveyard, telling her they are there for the harvest. This scene actually comes from a vivid dream my own grandmother once had and shared with me. In a way, a zombie apocalypse is the harvest of mankind. Our time is done. Those who survive have a big job ahead of them.

Stephanie: What do you like most about writing in this genre and when did you first become interested in it?

Melanie: I have always written fantasy novels, but I think I always took myself too seriously. I wrote The Harvesting for fun. I wanted to play. I wanted to pick a topic that was both light and deep all at once and just enjoy writing it. Zombies seemed like fun. I think that makes me sound weird, lol!

Stephanie: Writing fantasy stories are a lot of fun. I’m working on an alternate history one right now that fits pretty close to fantasy. It’s wonderful that you enjoy writing in this genre and are having fun.

Please tell me about your writing process.

Melanie: I’m a planner. I have to know how the novel will go from A-Z before I sit down to write. I usually map out a narrative arch on paper then go from there. My actual writing process doesn’t take that long because I plan so much.

Melanie: I love to live in my worlds. I love my characters. They are like real people to me. I enjoy spending time in their heads and seeing the world through different points of view. In the case of my steampunk series, The Airship Racing Chronicles, I love that I can invent an entirely magical and different world and give it verisimilitude!

Melanie: Shelley Adina, a steampunk author whose work I admire, is a BRAG recipient.

Stephanie: Is there a message you would like to give to your readers?

Melanie: Regarding The Harvesting, if they would like to try a zombie novel that is a bit different (I might even say quirky), they should give the book a try. Many readers say that while they aren’t into zombies, my book is so different that they really enjoyed it! I’ve gotten fabulous feedback on this novel from the book blogger community. It’s a fun, action-packed, book. It’s a fantasy-filled read with a kick-butt heroine, great for a Sunday afternoon.

Melanie: The Harvesting and my steampunk series, The Airship Racing Chronicles, are available at Amazon.com!

Melanie: My pleasure. Thanks for having me! 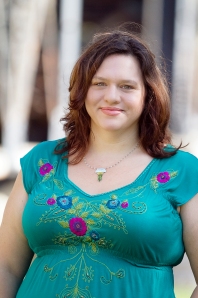 Melanie Karsak grew up in rural northwestern Pennsylvania and earned a Master’s degree in English from Gannon University. A steampunk connoisseur, white elephant collector, and zombie whisperer, the author currently lives in Florida with her husband and two children. She is an Instructor of English at Eastern Florida State College.