Jane Steen was born in England and, despite having spent more years out of the British Isles than in, still has a British Accent according to just about every American she meets. Her long and undistinguished career has included a three-year stint as the English version of a Belgian aerospace magazine, an interesting interlude as an editor in a very large law firm, and several hectic years in real estate marketing at the height of the property boom. This tendency to switch directions every few years did nothing for her resume but gave her ample opportunity to sharpen her writing skills and develop an entrepreneurial spirit. Around the edges of her professional occupation and raising children, she struck her nose in a book at every available opportunity and at one time seemed on course to become the proverbial eternal student. Common sense prevailed, though, and eventually she has the bright idea of putting her passion for books together with her love of business and writing to become a self-published author. She has lived in three countries and is currently to be found in the Chicago suburbs with her long-suffering husband and two adult daughters.

Stephanie: Hello, Jane! Thank you for chatting with me today and congrats on the B.R.A.G. Medallion. Please tell me about your story, The House of Closed Doors? And how you came up with such a fascinating title.

Jane: The House of Closed Doors is set in the American Midwest in the 1870s, and is the first book in a series. Nell Lillington is a spoiled seventeen-year-old who does not want to have to find a husband, the normal fate for girls of her age in her small hometown of Victory. Unfortunately, Nell is also pregnant, through a disastrous combination of flirtatiousness and ignorance. She refuses to name the father of her child, prompting her stepfather Hiram to send her to the Poor Farm of which he is a governor to have her baby, which will then be adopted. Nell is happy to go along with Hiram’s plan, and works at the Poor Farm as a seamstress, until a door is opened during the inspection of an unused wing of the Women’s House and two small bodies fall out.

Nell is the only resident of the Poor Farm who doesn’t believe that unwed mother Jo and her baby Benjamin were shut in the padded cell by accident. She begins asking questions—and also realizes she won’t let her own baby out of her sight. This means she has to escape the Poor Farm before the adoption takes place—but home turns out to be far from the safest place . . .

I’m not sure where the title The House of Closed Doors came from. It popped into my head early in the writing process, and I never changed it. Interestingly, as I edited the first draft of the book I realized that the title could refer to Nell herself, as her life is determined by the secrets she decides to keep.

Stephanie: Why did you decide on American Midwest in 1870 for the location and period of your story?

Jane: I live in the Midwest, and am fascinated by the rapid growth of settlement in the Chicago area. People came from all over America (and the world) to settle an area that offered enormous riches but was challenging in terms of climate and distances. I settled on 1870 for reasons connected with the more enlightened way ‘feeble-minded’ people were being treated at that point—advances that took over a century to return—but once I started researching the era I found it fascinating. The Civil War was a recent memory and the country still bore many scars; growth was tremendous due to a huge influx of immigrants, but there were still several international crises and periods of severe economic depression. And it’s a time not many writers cover, which made it more interesting to me. 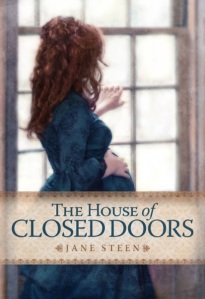 Stephanie: Your story sounds so intriguing. After reading the list of characters you sent me, I have to say that Nell and Martin stand out to me the most. Could you tell me a little something about them? Their strengths and weaknesses?

Jane: Nell starts out as a very self-centered character, but she learns responsibility and caring through her role as a mother, as Tess’s protector, and through her determination to bring about justice for the murders at the Poor Farm. Her strengths are her loyalty, her devotion to those she loves, her strong sense of fairness and her lack of prejudices.

Martin, on the other hand, has been given too much responsibility too early, and as a result has learned to hide behind his image as a purveyor of silks and satins, so much so that many are led to assume he’s gay (he’s not, and woe betide the man who says he is.) And yet his upbringing has made him into an astute businessman, and he has considerable financial acumen, a skill that’s going to stand him in good stead as the series progresses. He shares Nell’s commonsense practicality and her love of doing things right.

Stephanie: What exactly is the “Poor House”?

Jane: The County Poor Farm was a place where the authorities put those who had nowhere else to go: elderly people suffering from dementia, alcoholics, people with no financial resources, and what they called the ‘feeble-minded’ and we’d call people with cognitive disabilities. And, of course, unwed mothers, who were considered to have shown a complete lack of moral sense and were therefore not fit for good society.

The Prairie Haven Poor Farm in my novel is fictional, and probably a lot kinder than some of these places were. It follows the principles of a physician and educational thinker called Edouard Séguin, who advocated the education and rehabilitation of the cognitively disabled to make them into independent, self-reliant members of society. My novel portrays an ideal Poor Farm that allows its residents to pursue healthy outdoor work within their capabilities, and thus gain back their self-respect.

Stephanie: I always wonder how writers come up with names for their characters. The fictional ones that is…. How did you come up with yours?

Jane: Nell’s proper name is Eleanor, which has always been one of my favorite names. Some of the other names were ones I liked; others were chosen from lists of popular Victorian names I found online (such as Hiram, which you never see now but was a popular American name) or from random name generators. I just keep looking till I find the name that fits the character.

Stephanie: How long did it take for you to write your story and what was your writing process like?

Jane: I wrote the first draft of The House of Closed Doors very quickly, in just a month—during National Novel Writing Month 2010, in fact. As I had an ambitious writing goal, I had to be very disciplined about hitting my daily word count, but in fact it was easy as I was really enjoying the story and the characters.

But then the hard work started—I spent a year editing and rewriting, getting input from readers and rewriting again. Quality is very important to me, so I took the time I needed to get the novel the way I wanted it.

Stephanie: I understand this is part of a series? Are you currently working on the next book and when can readers expect it?

Jane: I’ve been working on the second book in the series, called Eternal Deception, for more than two years! It is my problem child book, as the first draft never worked for me and after spending a year trying to get it to work, I scrapped it and rewrote it completely. I like the current version a whole lot more, but it ended up too long in parts and I’m currently working on editing it again. Fortunately I have great writing buddies who are willing to read the drafts and give me their input. I wish I could give a release date, but to be honest after the problems I’ve had with this book I don’t want to make any promises I can’t keep. Let’s just say I’m working hard at it.

Stephanie: When did you know you wanted to be a writer? And who are your influences?

Jane: I always loved writing and have had a number of jobs that involved writing, but I didn’t seriously consider writing fiction till 2009. I wrote in my early twenties, but let’s just say I wasn’t in an environment of encouragement just then, so I gave up and wrote my stories in my head for more than twenty years until they just refused to live there any more.

Stephanie: How often do you write and where in your home is your favorite place to do so?

Jane: I write every day. I’m lucky enough to have an office as I’ve worked from home a lot, so that’s where I spend my working day, combining writing with my role as ‘executive assistant’ to my disabled daughter. I find it very easy to work for myself—the problem is usually dragging myself away from my work to tend to my house and family, although my daughter is very good at keeping me on task.

Jane: I saw IndieBRAG mentioned on a blog. I’d been looking for some kind of selective process for self-published books, and IndieBRAG was a great step in the right direction.

Stephanie: Where can readers purchase your book?

Jane: The ebook is available online through all the major outlets. There is an audiobook available through Audible, iTunes and some other online retailers. I’m working on a print edition that should be available soon online and, eventually, through the usual distribution channels.

Jane: You’re welcome – that was fun.

We are delighted that Stephanie has chosen to interview Jane Steen, who is the author of, The House of Closed Doors, one of our medallion honorees at indieBRAG . To be awarded a B.R.A.G. Medallion TM, a book must receive unanimous approval by a group of our readers. It is a daunting hurdle and it serves to reaffirm that a book such as, The House of Closed Doors merits the investment of a reader’s time and money.