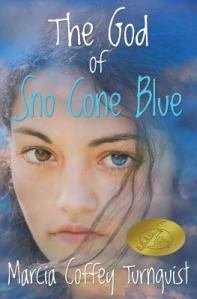 Marcia Coffey Turnquist, an author and journalist, is currently writing her second novel, Skipping the Light. Before venturing into the world of fiction, she spent 12 years as a news broadcaster, working her way back to her hometown of Portland, Oregon and KOIN-TV. Marcia decided to retire from broadcasting to raise the son and daughter who ultimately inspired The God of Sno Cone Blue. Her two children are all but grown now, the youngest just off to college and the other currently studying abroad. Marcia lives with her husband Ed in the soggy-but-green suburbs of Portland.

Stephanie: Marcia, congrats on the B.R.A.G. Medallion for your book, The God of Sno Cone Blue and thank you for talking with me today. I am hearing absolutely fabulous things about your story and have added it to my wish-list. Before we begin, please tell me how you discovered indieBRAG and what are your thoughts on the B.R.A.G. concept?

Marcia: Thanks, Stephanie, I’m thrilled about the Medallion. I’ve always loved, loved, loved my story, and it feels fantastic to have indieBRAG basically fall in love with it too.

Other writers on the Internet essentially introduced me to the indieBRAG website while I was looking for an objective reviewer—and now I’m a huge fan. The concept of indieBRAG is not only helpful but vital, since self-publishing is on fire and here to stay. There are so many books out there, readers need indieBRAG to weed through them and highlight the best. My guess? Very soon, and especially for readers of Ebooks, indieBRAG will be a household name.

Stephanie: I love your title! How did you come up with it and how does it tie into your story?

Marcia: The phrase “sno cone blue” appears on the first page as my main character, Grace, describes the color of the sky during a pivotal moment in her life. Readers discover the depth of its significance later, though I’d spoil it if I explained how!

The title of my book often comes up. Some people read it and assume the book is “religious,” which can be a negative or a positive, depending on the reader’s perspective. The truth is, the story is neither “religious” nor “proselytizing.” They also wonder if it is autobiographical, and the answer is no: I was not a preacher’s daughter. I chose the setting for a simple reason: to make questions of faith and doubt, mistakes and redemption feel natural. As Grace loses her mother and begins to learn her secrets, the reader feels what she feels and asks the questions she asks. But any conclusions about what it all means are left to the reader, and that, I think, is where the story shines.

Stephanie: Please tell me a little about your story and what your inspiration was.

Marcia: Motherhood was my inspiration. My anxieties surrounding it, more specifically. After I had my babies—first a boy, then a girl—I couldn’t help worrying about their safety and security both immediate and in the future. At some point, I asked myself: What would happen to them if I died? Sure, their dad would still be there to provide for them, but would they know how deeply, how profoundly, I loved them? Would they know the things I cared about, how I lived my life? Perhaps if I wrote letters to them, I thought, so they could hear my voice and my stories…

I started considering the idea as a writing project, ultimately realizing that it had potential but wasn’t enough. A love story from mother to child would read like a very long Hallmark card. So, I gave it time, eventually coming up with Sharon’s hidden past. Then I began weaving the stories, threading her life and timeline to that of Grace’s coming of age.

Stephanie: I really am intrigue with your premise. The idea of a person receiving letters after a love one as passed is so mysterious and thought-provoking. Does this make her mother’s past bond her closer/stronger to her and does it change her life? Could you give me an example of how it does….something maybe she discovered in her mother’s past through the letters, perhaps?

Marcia: At the beginning of the story, Grace knows almost nothing about her mother’s life before marrying the preacher. Sharon refused to talk about it as well as the recurring bouts of depression she calls her “blue hour.” After she’s gone, the letters begin coming—quite mysteriously—and, little by little, tell the story of her early years, including her life as a poor caretaker to wealthy landowners with a young son. Grace becomes obsessed with the letters and finding the rest of them and, yes, develops a new kind of bond with her mother. When she finally reads the last letter and her mother’s deepest secret, she embarks on a journey that changes her life and perspective forever.

Stephanie: What are Grace’s weaknesses and strengths?

Marcia: Grace is funny, spunky and persistent, but also lonely, petulant and, at times, judgmental.

Stephanie: Tell me a little about Grace’s father-the preacher?

Marcia: Preacher Thad was one of my favorite characters to write. He stands six feet four and has a persona just as imposing. From the beginning you wonder if you’re going to like him, and then in the end? Alas, you will have to read it.

Marcia: That’s an easy one. I grew up during those years and they were such a cultural sea change. As they say, “Write what you know.” Plus, I had fun reliving the history.

Stephanie: As a preacher’s daughter myself I’m always curious about other preacher’s children and even in books as well. Even though they are fictional characters. I’m always interested in how the author develops their life as one…What was Grace’s childhood like being a preachers daughter and was she expected to live up to her father’s position?

Marcia: A preacher’s daughter—part of an exclusive class! And to answer your question: yes, Grace did have a lot to live up to. Even more importantly, her mother was expected to act like a traditional preacher’s wife, but that didn’t quite happen.

Stephanie: How long did it take for you to write your story and who designed your book cover?

Marcia: I used to be embarrassed to say it, but ten years! Then I read about the 10,000-hour rule, which basically asserts you need 10,000 hours of practice to master any given skill. I did a little calculating and realized that 10,000 hours was almost exactly the amount of time I’d spent writing, editing and finding my voice for this first novel. At that point, I was no longer embarrassed, because I do feel confident now that I’m a skilled writer. And the upside is that my second novel is going ten times faster. Maybe there’s a rule for that? The rule of one-tenth?

As to the cover, I have a talented brother-in-law who is a photographer and skilled photo shop editor. He and I came up with the concept, I found the model’s image and bought the rights to it, and he put it all together beautifully.

Stephanie: What do you like most about writing and how much time do you devote to the craft?

Marcia: Regarding time, the above answer gives you some idea, but in hours spent daily, I’d say four to six (primarily weekdays).

What I like most about writing are those serendipitous creative moments when things just happen: an idea is born—large or small—that you know is perfect, just right, meant to be, when it feels like magic or something divine.

Marcia: The simplest way to see all the retailers (both paperback and eBook) is to visit the Buy Books page on my website. Thanks for having me, it’s been a pleasure, and happy reading!

We are delighted that Stephanie has chosen to interview Marcia Coffey Turnquist   , who is the author of, The God of Sno Cone Blue, our medallion honorees at indieBRAG . To be awarded a B.R.A.G. Medallion TM, a book must receive unanimous approval by a group of our readers. It is a daunting hurdle and it serves to reaffirm that a book such as, The God of Sno Cone Blue, merits the investment of a reader’s time and money.