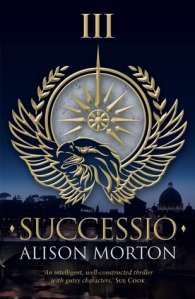 Roma Nova – the last remnant of the Roman Empire that has survived into the 21st century – is at peace. Carina Mitela, the heir of a leading family, but choosing the life of an officer in the Praetorian Guard Special Forces, is not so sure. She senses danger crawling towards her when she encounters a strangely self-possessed member of the unit hosting their exchange exercise in Britain. When a blackmailing letter arrives from a woman claiming to be her husband Conrad’s lost daughter and Conrad tries to shut Carina out, she knows the threat is real. Trying to resolve a young man’s indiscretion twenty-five years before turns into a nightmare that not only threatens to destroy all the Mitelae but also attacks the core of the imperial family itself. With her enemy holding a gun to the head of the heir to the imperial throne, Carina has to make the hardest decision of her life… “If there is a world where fiction becomes more believable than reality, then Alison Morton’s ingenious thrillers must be the portal through which to travel. Following in Caesar’s footsteps, she came with INCEPTIO, saw with PERFIDITAS – and has well and truly conquered with SUCCESSIO!” – Helen Hollick, author and Managing Editor Historical Novel Society Indie Reviews “Alison Morton has done it again. SUCCESSIO is the latest in her series of powerful tales of family betrayals and shifting allegiances in Roma Nova. Once again, I was gripped from start to finish.” – Sue Cook, writer and broadcaster 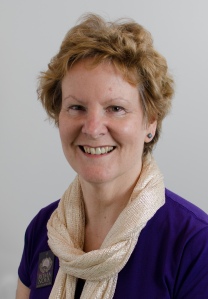 Alison Morton writes Roman-themed alternate history thrillers with strong heroines. She gained a BA in French, German and Economics and thirty years later went back and bagged a masters’ in history (with distinction!).

A ‘Roman nut’ since age 11, she has visited sites throughout Europe including the alma mater, Rome. But it was the mosaics at Ampurias (Spain) that started her wondering what a modern Roman society would be like if run by women…

Six years in the UK reserve forces (where she rose from private soldier to captain) not only reinforced her sense of common purpose and self-discipline, but provided her with experiences and opportunities no civilian would ever touch. Oh, and travel and fabulous mess evenings.

Setting about her novelist education with the persistence of a Roman road builder, she joined the Romantic Novelists’ Association New Writers’ Scheme, studied with the Arvon Foundation, joined the Historical Novel Society and attended numerous specialist workshops and conferences. Thanks to her independently published book sales figures, she has recently qualified as a full member of the UK’s Society of Authors. She has recently been accepted as an author member of International Thriller Writers.

Alison talks and writes about alternative history at conferences and workshops including for the Romantic Novelists’ Association, the Historical Novel Society and in Writing Magazine. She also writes a monthly column in the local English language magazine and has published a collection of these as The 500 Word Writing Buddy: 25 Inner Secrets for the New Writer.

INCEPTIO, the first in the Roma Nova series, which was also shortlisted for the 2013 International Rubery Book Award, and PERFIDITAS, the second in series, have been honoured with the B.R.A.G. Medallion, an award for independent fiction that rejects 90% of its applicants.  Alison’s third book, SUCCESSIO, which came out in June 2014, was selected as the Historical Novel Society’s indie Editor’s Choice for Autumn 2014 and has also been awarded the B.R.A.G. Medallion.

Alison is represented by Annette Crossland of A for Authors Literary Agency for subsidiary and foreign rights.

Connect with Alison on her blog