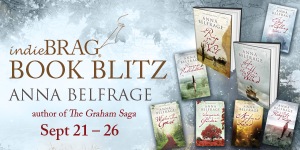 It’s not too late to check out the indieBRAG Book Blitz with Anna Belfrage and meet the Grahams. Wonderful interviews-including a character interview with Matthew Graham, an excerpt, guest post and a fabulous giveaway! To follow more post be sure to clink on the Book Giveaway & Tour Schedule link below.
About the Graham Saga
This is the story of two people who should never have met – not when she was born three centuries after him. But sometimes impossible things happen, and so Alex Lind ends up at the feet of Matthew Graham. Life will never be the same for Alex – or for Matthew.

Had Anna been allowed to choose, she’d have become a professional time-traveller. As such a profession does as yet not exists, she settled for second best and became a financial professional with two absorbing interests, namely history and writing. These days, Anna combines an exciting day-job with a large family and her writing endeavours.
When Anna fell in love with her future husband, she got Scotland as an extra, not because her husband is Scottish or has a predilection for kilts, but because his family fled Scotland due to religious persecution in the 17th century – and were related to the Stuarts. For a history buff like Anna, these little details made Future Husband all the more desirable, and sparked a permanent interest in the Scottish Covenanters, which is how Matthew Graham, protagonist of the acclaimed The Graham Saga, began to take shape.
Set in 17th century Scotland and Virginia/Maryland, the series tells the story of Matthew and Alex, two people who should never have met – not when she was born three hundred years after him. With this heady blend of romance, adventure, high drama and historical accuracy, Anna hopes to entertain and captivate, and is more than thrilled when readers tell her just how much they love her books and her characters.
Presently, Anna is hard at work with her next project, a series set in the 1320s featuring Adam de Guirande, his wife Kit, and their adventures and misfortunes in connection with Roger Mortimer’s rise to power. The King’s Greatest Enemy is a series where passion and drama play out against a complex political situation, where today’s traitor may be tomorrow’s hero, and the Wheel of Life never stops rolling. The first instalment in the Adam and Kit story, In the Shadow of the Storm, will be published in the autumn of 2015.
Other than on her website, Anna can mostly be found on her blog – unless, of course, she is submerged in writing her next novel.
Author Links:
Website
TwitterFacebook
Amazon
Book Giveaway & Tour Schedule.