I’d like to welcome back B.R.A.G. Medallion Honoree G.J. Reilly to Layered Pages. Back in July we talked about his writing process, how writing has impacted his life and where his ideas come from.  Today we talk further in-depth about his emotions as a writer, goals, boundaries and so on…

By day, G. J. Reilly is a teacher of (mostly) ICT and Computing in the South Wales valleys, where he lives with his long-suffering wife and 2.4 cats.

He has an eclectic selection of hobbies, from playing a number of musical instruments with varying degrees of competence to learning the art of contact juggling and teaching sword-based martial arts. Having gained his degree, he spent ten years working in industry, before deciding to change career and head into education.

What are your goals as a writer?

At the moment, my goal is to write stories that readers remember and enjoy. If it leads to bigger things in the future, I’ll be happy with that.

What are the boundaries you push as a writer?

At the moment, it feels like just about everything is a boundary for writers unless you’re the type that enjoys the potential for controversy. We seem to have entered a period of heightened social awareness (fairly recently), where just about anything can be taken out of context or be offensive to somebody. There seems to be a confused state of what is acceptable, where any personal opinion made public needs to be sanitized first, or risk the wrath of thousands. For example, if I were to publish the language used by John Steinbeck in ‘Of Mice and Men’ nowadays, I’d be close to committing professional suicide for the backlash it would invite. 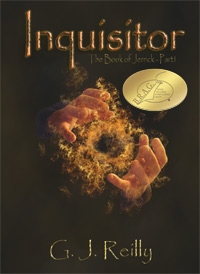 With the ‘Book of Jerrick’ series, I’m trying to challenge this pervasive sense of moral superiority that’s crept into daily life. ‘We are better than them because …’ and ‘You can’t say that because …’ have become the mantra of social media in everything from politics to religion. So, by creating two factions that share a common ancestry, I hope I can illustrate how we are one as bad the other in the atrocities we commit, but equally as good as each other for our acts of kindness and civility. Or to put it another way, our history is important for the lessons it teaches us, but it’s how we live in the present that defines us.

It’s not exactly a great shove in the direction of social reform (like books on the civil rights movement, or stories about the heroines of women’s liberation); it’s more a passive statement of dissatisfaction about the current state of affairs, aimed at the generations that will shape the future and buried in enough subtext that it doesn’t spoil what I hope is a good story.

What are the changing emotions you have as a writer?

From the point of view of the story, I can wholeheartedly say that I try to empathize with my characters as much as possible. I’ve always felt that investing emotionally as an author helps readers to do the same. What that means (to me anyway), is writing from experience. In instances where I don’t have the experience to draw on – like the horror of killing someone for example – I try to imagine myself in that situation and translate how I would feel to the page. I suppose it’s how I would imagine what life is like as a method actor, but instead of one character at a time, there are hosts of them running around in my head, all needing the same attention to detail to make them pop. It can be an exhausting process, especially if I’m writing two or three different scenes at a time. And it can be just as exhausting away from the keyboard too. There’s the excitement of a great idea, or solving a problem I’ve been thinking about for days and the trepidation of how the story is going to be received. It’s a wonder most writers don’t end up a hot mess in a corner somewhere, gibbering insanely!

What are your personal motivations in story-telling? 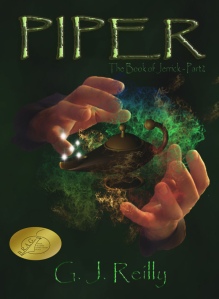 For me, it’s mostly about reciprocation. I used to love being read to as a child, but there’s little better about a good book than discovering it in your own voice and in your own time. I consider myself to have been extraordinarily privileged to have had access to some amazing stories, told by some exceptional wordsmiths. Giving that experience to somebody else would be a dream come true for me.

My favorite stories are the ones that move me in some way, whether they make me feel happy, or sad, or angry, it doesn’t matter. But, to have the gift to be able to move someone you’ve never met to tears, or laughter, without them ever really knowing the sound of your voice … it fascinates me. You can always tell when an author’s doing it right if you look at the face of someone who’s engrossed in their book. To me, that is what story-telling is all about: allowing readers to take a trip outside of themselves if only for the length of a chapter each time and giving back a little of the joy I’ve had in the worlds of other authors.

I’m not sure I can answer that. I think the best thing to do would be to ask the people who have read my work. All I can tell you is that you’ll probably find echoes of a number of authors and various styles in there. I read as widely as I can, even textbooks from time to time, so I’d be surprised if none of that experience has influenced my writing in some way. I think it would be sad to think that it hadn’t.  It’s definitely my voice, however. If we had ever spoken face to face, I’m sure you’d recognize the intonation (even without the valleys accent on words like ‘hear’ and ‘year’).

Five sentences that describe your craft.

To me, writing is a magical mishmash of personal experience and an overactive imagination.  It’s a real pain in the butt when I’m trying to get a good night’s sleep. It’s an intimate look at what goes on inside my head – but only the best bits. It’s also the easiest thing in the world to practice and the hardest to try to master. And it can be long, hard, lonely work sometimes … but it’s worth it!

Check out these other great posts with G.J. Reilly!

A Writer’s Life Part I