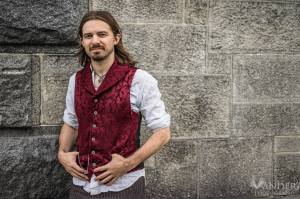 I’d like to welcome B.R.A.G. Medallion Honoree J.M. Aucoin to Layered Pages today to talk with me about his book, Honor Among Thieves. J.M. Aucoin is the product of when a five-year-old boy who fell in love with reruns of Guy William’s ‘Zorro’ grows into a mostly functional adult. He now spends his time writing swashbucklers and historical adventure stories, and has an (un)healthy obsession with ‘The Three Musketeers.’

When not writing, J.M. Aucoin practices historical fencing and covers the Boston Bruins for the award-winning blog, Days of Y’Orr. He lives in Heraldwolf’s Stone with his fiancee Kate and their dire-beagle, Rex.

Hi, Justin! Thank you for chatting with me today and congrats o the B.R.A.G. Medallion! What is the premise of your story?

Honor Among Thieves is a historical adventure novel set in the early 1600s, during the Henri IV’s reign in France. We follow Darion Delerue, a former soldier turned highwayman, who has only two things of value in life—the hope in his heart and the steel at his side. After a heist on a royal ambassador goes wrong, he’s is thrown into a political plot to undermine the crown, pitting his old life as an honorable soldier against his new life as a thief and bandit. His actions could send France back into civil war.

There’s plenty of swordplay for folks who love a little action and adventure, but wrapped in real historical events for those who want to learn some history in the process. 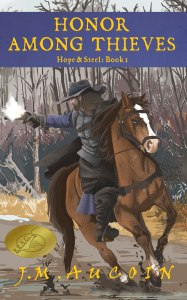 Why Historical Fiction and how did you choose you setting and period?

I’ve been a fan of swashbucklers since I was a little kid. Every week I’d watch reruns of Guy William’s Zorro on Disney. I also fell in love with Disney’s The Three Musketeers as a child. Both stories captivated me. The idea that you could right wrongs and fight injustice with little more than a sharp blade and your wits was a powerful message that resonated with me as a kid – and has followed me into my adulthood.

I chose the early 17th Century France as an homage to Alexander Dumas’s The Three Musketeers. But since he took a sizable portion of France’s 17th Century historical events, I decided to turn back the clock to a time before the Mousquetaires du Roi were formed. By 1609, the French Wars of Religion had come to a close and France was on the rebound. It was a transitional time, free of war but with the threat of it around every corner. It seemed like an untouched setting and era, and a fun playground to work in.

Tell me a little about Darion Delerue strengths and weaknesses?

Sure. Darion is a complicated fellow – like most of us, I’d imagine. He’s an exceptional swordsman. Prudent and courageous, and with a relatively strong moral compass despite his life as a highwayman.

But he’s also stubborn and proud, and a bit raw around the edges when it comes to more diplomatic measures. He’s lived a rough life and it shows in his demeanor, but deep down he wants to evolve into something greater than he is – he’s just not sure if he’s capable of it.

What is an example of political intrigue in your story?

In 1609, Spain was struggling with its war with the United Providences, and France was working hard on an alliance with Dutch against Spain. In a desperate effort to keep the alliance from happening, they sent an ambassador to France to secure a double marriage between the two countries. Of course, Henri IV’s goal in life was to humble the Spanish Hapsburgs, so you can imagine how well that went.

So readers will get to see the interactions between Henri IV and Don Pedro de Toledo. But next to that is a fictional plot line that twists and wraps itself around some of these historical events. And not to give too much away, but an old enemy of Henry IV rears its head because of it all.

How much research went in to writing your story?

A decent amount, but finding good resources was actually difficult. I was surprised to find so little information at my local library (*shakes fist at Boston Public Library*), so I had to get creative. I found some nice (albeit older) research books online via Google Books that were free to download.

I must’ve spent a year and a half or so just researching to give myself a base level of knowledge of the times. I still research while I write, mostly detail stuff to give the story that authentic feel, but I feel pretty comfortable to power ahead as need be.

Who designed your book cover?

A good friend of mine – Graham Sternberg. We know each other via our love for practicing historical swordsmanship. Just so happens that he’s a professional artist. So I tapped him to be the artist for the Hope & Steel series. It was a lot of fun to work with him on the cover – collaborating ideas and seeing it come to life. The book cover creation process is one of my favorite parts of self-publishing.

Like 99.9% of self-publishers, you can find Honor Among Thieves on Amazon for Kindle and in paperback. For people who hate to give their cash to Amazon, they can buy an autograph copy via my Facebook store for the same price.

I’m about half way through the sequel to Honor Among Thieves (currently untitled). I’m also plotting some short fantasy adventures, too. Always seems to be more ideas than there is time to work on. Can I buy a few extra hours in the day? I’d really love to write all the things.

We are delighted that Stephanie has chosen to interview J.M. Aucoin who is the author of, Honore Among Thieves, our medallion honoree at indieBRAG. To be awarded a B.R.A.G. Medallion ®, a book must receive unanimous approval by a group of our readers. It is a daunting hurdle and it serves to reaffirm that a book such as, Honor Among Thieves, merits the investment of a reader’s time and money. 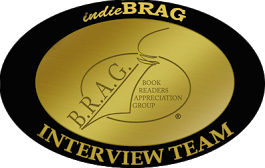