I’d like to take this opportunity to congrats Stuart S. Laing on his newly released story of his 9th Robert Young of Newbiggin Mysteries. His stories take you back to another time and draws you into the dark streets of Edinburgh, a city not immune to its murderous intrigues and shady taverns. Stuart tells me this is story is a darker tale than some but not without lighter moments, and even the hope of a happier future for some of those who find themselves caught in snares not of their own making…

“Who can judge who is truly mad, when even the doctors are insane?”

Behind the high walls of Edinburgh’s Bethlem Hospital, the mad, the bad and the dangerous are kept safely locked away from the public gaze, unless, of course, the public are prepared to pay for the thrill of viewing these unfortunate, insane souls in the human menagerie they call Bedlam.

For some though, these tours are not thrilling enough, and for a select few there is the possibility to visit long after the public have departed. These men have the opportunity to become intimately acquainted with the patients if they have the nerve, and the money, to risk tasting the grimmest of forbidden fruits.

One such private tour ends in blood and terror; a doctor is found murdered and his patient escaped into the filth choked streets of the night.

Robert Young of Newbiggin, private investigator to the wealthy, finds himself being drawn into the mystery to identify the person responsible for the doctor’s death and, in doing so, discovers that there are uglier truths to be unearthed than he could ever have imagined possible.

From the horrific truth behind a young woman, abandoned and alone in a foreign land, to the darkest of family secrets, Robert and Captain Travers of the Town Guard, must venture deep into the closed world of a Georgian asylum, a hospital where casual cruelty and abuse are considered normal, and kindness is frowned upon. Only here, in this man-made hell can they hope to find the killer before they strike again.

Character in Motion-Two Sides of a Coin 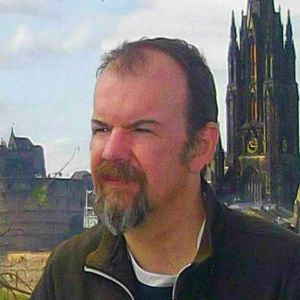 Born and raised on the east coast of Scotland in the ancient Pictish Kingdom of Fife, Stuart Laing grew up looking across the Firth of Forth towards the spires and turrets of the city of Edinburgh and its castle atop its volcanic eyrie. He has always been fascinated by the history of Auld Reekie and has spent most of his life studying Scottish history in all its aspects whenever he finds the time between family, work and the thousand and one other things that seek to distract him. Despite the vast panorama of Scotland’s history, he always finds himself being drawn back to the cobbled streets of the Old Town. Those streets have provided the inspiration for his stories and characters. He would urge all visitors to Scotland’s ancient capital to (briefly) venture into one of the narrow closes running down from the Royal Mile to get a flavour of how alive with mischief, mayhem, love and laughter these streets once were.

1 thought on “The Mistress of Bedlam is the 9th Robert Young of Newbiggin Mysteries by Stuart S. Laing”