Writing stories is an admirable feast of creativity, perseverance, skill, and the deep understanding of the human condition. What makes people tick? I admire writers who go the distance and produce works of art in storytelling. Writers truly give us a destination, an escape from our lives, and the experience to explore different avenues in life we might not have the chance to explore in our own lives. That is truly magical.

There are all sorts of different types of stories. Author Lou Aguilar brings us a unique story of a man name Ken Miller who exploits a dog’s popularity among a group of people and persuades them to elect Jake for Mayor. What a clever and engaging plot-I look forward to reading this story and further sharing my thoughts about this book.

Ken Miller is having a bad run of luck. After torpedoing his career as a campaign manager, he drives through tiny Erie, Colorado, when a homeless beagle named Jake causes a series of mishaps that lands him in jail. Ken is granted bail on two conditions: that he not leave town before his trial in three weeks and—much to his chagrin—that he not let Jake out of his sight until then. Stuck in Erie as it prepares for a mayoral election, he’s drawn into the local politics by a waitress who vehemently opposes incumbent Charles Dunbar, the only candidate on the ticket.

Unable to resist political adventure, Ken gets a brainstorm. If he can exploit the dog’s popularity among the townspeople and get them to elect Jake as a protest candidate, the publicity will put him back on top. But things don’t go exactly as planned. Ken warms to the dog, falls for the waitress, and employs her teenage son and his gang as campaign aides in a madcap battle with Mayor Dunbar … who has no intention of losing to a dog.

Read what people are saying about Jake for Mayor:

“In the spirit of full disclosure, I own a beagle, and this book is perfect for me, so I may be a bit prejudice (I’ve read “Shiloh” and watched the movies several times). That said, this is not a children’s book about a beagle, but about Ken Miller, a failing campaign manager and lost soul in the political arena (or is that redundant?) yearning for redemption.” -Topdog

“The rule of thumb is, the more absurd and frightening the state of affairs – the more entertaining the satire. Lou Aguilar understands the formula. I will not hesitate to call him a 21st century Thackeray. An indie filmmaker in his other life, he produces a work of fiction that’s cinematic in its delivery. Jake for Mayor will leave you with a profoundly gratifying, wanna-take-a-shower feeling.” -Money In the Mattress

“Jake for Mayor is a quick read full of fun moments, sly commentary and heart. A fish out of water story in the arena of Doc Hollywood, I enjoyed it. A book that can be enjoyed by a people in a vast range of ages.” JWB

“Why not be the campaign manager for a dog? Just think about the dog’s sweet nature and inability to make gaffes or destroy one’s reputation. Then view the dishonest incumbent candidate, Mayor Dunbar, who belittles his constituents who lack power and money. Ken Miller realizes the townspeople love the dog but knows that the Dunbar would rather commit a crime than lose to a dog.” Tess 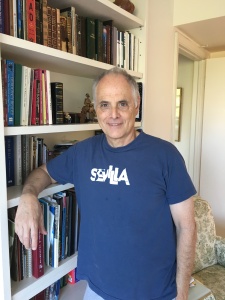 Lou Aguilar was born in Cuba and lived there until age six, when his anti-Castro scholar father flew the family to America one step ahead of a firing squad (for his dad, not Lou). He attended the University of Maryland, where he majored in English, minored in film, and found both to be dependent on great writing. He became a journalist for “The Washington Post” and “USA Today,” then a screenwriter, and finally a novelist. Lou has had three small movies produced, including the cult science-fiction film “Electra” (33rd on Maxim’s list of “The 50 Coolest ‘B’ Films of All Time”). He presently writes only “A” scripts and has a television legal drama and military thriller feature in development. Lou’s last short story, “The Mirror Cracked,” was published in a prestigious horror anthology, “Kolchak: The Night Stalker Chronicles,” which was nominated for a Bram Stoker Award. Visit Lou’s website

Buy the book at Amazon and  Barnes & Noble.

1 thought on “Book Spotlight: Jake for Mayor by Lou Aguilar”