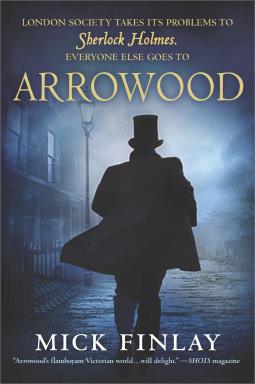 London Society takes their problems to Sherlock Holmes. Everyone else goes to Arrowood.

The Afghan War is over and a deal with the Irish appears to have brought an end to sectarian violence, but Britain’s position in the world is uncertain and the gap between rich and poor is widening. London is a place where the wealthy party while the underclass are tempted into lives of crime, drugs and prostitution. A serial killer stalks the streets. Politicians are embroiled in financial and sexual scandals. The year is 1895.

The police don’t have the resources to deal with everything that goes on in the capital. The rich turn to a celebrated private detective when they need help: Sherlock Holmes. But in densely populated south London, where the crimes are sleazier and Holmes rarely visits, people turn to Arrowood, a private investigator who despises Holmes, his wealthy clientele and his showy forensic approach to crime. Arrowood understands people, not clues.

Sherlock Holmes is not the only private detective in London and if he has competition, it still remains to be seen. Arrowood and Barnett are hard press for a client and when a woman appears at their office seeking help to find her brother, the two detectives reluctantly decide to help her. Before they know it, they find the case more of a challenge than they thought. One of their potential witnesses ends up dead early on in the investigation and things get really heated after that.

Arrowood is an arrogant, silly man in many ways in my opinion. He annoyed me to no end. I have a feeling this might be the author’s goal for this character. As least I hope since I’ve been brutally honest about how I feel about him. The question is Arrowood’s characterization important for the story? There were a few times I wanted Barnett to slap him stupid. Though I have to admit his method in finding clues and questioning witnesses is an interesting one. He seemed to pride himself in being the opposite of Sherlock and had no problems in expressing that-too often in my opinion. Having said that, there were times I felt sympathy for him. Maybe just a little. If it weren’t for Barnett, the story wouldn’t hold much weight for me. I wish Sherlock had come along to shake things up.

I would like to add that I felt there were too many characters in the story. At times, it was a bit of a challenge to keep up. However, I do understand that in order for detectives to solve a case, they must interact and talk to a lot of people. Still…

The ending was satisfactory. In a nutshell, this was just an okay read for me. I expected more…

I rated this book a generous three stars.

I obtained a copy of this book from the publishers through NetGalley.