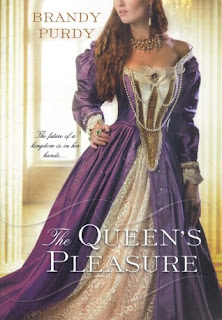 The Queen’s Pleasure by Brandy Purdy
Brandy Purdy writes a story about Robert Dudley who meets Amy Robsart-a daughter of a squire-and falls in love with her. Despite his family’s misgivings of the match he soon marries her. Not long after, Robert’s love for Amy fades and he wants to return to court. When Elizabeth becomes Queen of England, Robert’s ambition grows and so does his resentment towards his marriage to Amy. Roberts’s loyalties seem to move to whoever is in power at the moment and throughout the story he shows no quilt or remorse for his actions. When Amy turns up dead, suspicion falls on Dudley and people question whether the Queen was involved.

This story focuses on Robert’s wife, Amy & Queen Elizabeth’s point of view. Even though Roberts view is lacking, Purdy writes in great detail of Roberts emotional, physical and mental abuse to Amy and his constant demands of Elizabeth. Robert completely disgusted me and what sadden me the most was that he left Amy shut up in various manners across the countryside for long periods of time-alone- not caring for her well-being while he was at court living the royal life and misleading Elizabeth about his relationship he has with his wife.

The lack of dialog in the beginning of the story made it difficult to read and I felt parts of it was getting a little repetitive and could have been shortened. However, Purdy does a superb job exploring the mind of an abused wife.

In-spite of already knowing about Amy’s mysterious death, it wasn’t any easier reading about it again. The circumstances surrounding her death is still a mystery and we know very little about Amy and her marriage to Robert. Purdy gives us a clear and painful perspective of how it could have been for her. I applaud Purdy for strong character building and even though I was mentally exhausted after reading this story… it was a gripping & emotional read. I recommend this story to readers who enjoy reading about the Tudors and wanting to explore more of Amy’s life.

What She Knew by K.R. Hughes
(Picture Unavailable)
﻿
Wow! Just wow! What She Knew by K.R. Hughes and T.L. Burns has left me speechless and wanting more! What She Knew is a story that based on what would happen if on that fateful night in August of 1962 if Marilyn would have lived. There are so many famous names in this book from the entire Kennedy family to Frank Sinatra and the rat pack. K.R. Hughes and T.L. Burns do an excellent job of spinning a story and keeping the reader in suspense while they read about all of these famous characters. The reader will really feel as if they have stepped into the middle of the Camelot. The story will keep you guessing right until the very end…right until the day of November 22, 1963.
I was excited to receive this book to review, I am such a big Marilyn Monroe girl and any book that I could read about her I do. This story was written based entirely off of a “What if” question and boy does it pull every conspiracy theory over the night the Marilyn Monroe died, how she died, and why she died into light. It was no secret that she had an affair with president and it was no secret that many different people wanted her out of the way but why? What did she know that made her such a liability? K.R. Hughes and T.L Burns had created a story that leaves the reader wondering just how much of what they have written is true or how much of it is make believe.
I give this book 4.5 stars!
Rachel Massaro