Sarah, I applaud you for writing such a beautiful and brilliant story! When I read Vivaldi’s Muse, I couldn’t put it down! Could you please tell your readers about your story?

Absolutely! Set in early 18th-century Venice, Vivaldi’s Muse explores the life of Anna “Annina” Girò, Antonio Vivaldi’s longtime protégée. When I first came across the seeds of this story over a decade ago, in my research on Vivaldi’s operas, I was immediately intrigued. The more digging I did into the details of Annina’s and Antonio’s relationship, the more hooked I became. Here is the story that emerged after my years of research, in a nutshell:

Annina first falls under the spell of the fiery and intriguing prete rosso (red-haired priest) at a young age, when Vivaldi is resident composer at the court of Mantua, her hometown. Stifled by the problems of her dysfunctional family, she has long dreamed of pursuing operatic stardom, and her attraction to the enchanting Venetian maestro soon becomes inseparable from that dream.

She eventually joins him in Venice, but her road to theatrical success is rife with obstacles such as malicious rival singers, disparaging impresarios, and unscrupulous noble patrons. Rumors about the nature of her relationship with her beloved mentor, Vivaldi, abound and lead to dire problems yet, ironically, draw them closer together. But her growing guilt about her secret longing for him, complicated by her inherent fears of rejection and abandonment, threaten to poison their relationship from within. In the end she discovers that their love for each other has grown into something that transcends their personal relationship¾and she finds true love when she least expects it. 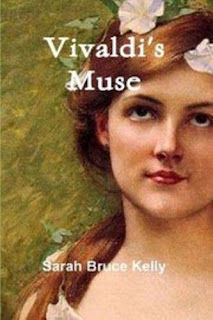 It’s very clear that you did extensive research for your story. Please tell me a little about what was involved in your research.
My research for Vivaldi’s Muse spanned about ten years and included travels to Northern Italy and Austria, as well as a drive through the Alps. During this time I tracked down and translated countless historical documents, from which I gathered a wealth of information. Sorting through and putting together this mountain of information was quite an adventure in itself, involving many “Aha” moments, when certain puzzling situations began to take on some clarity. It was sort of like putting together a giant puzzle which, while often challenging, was also extremely exciting.
Your characterization of Annina and Antonio is remarkable and you did a fantastic job bringing the early eighteenth-century opera back to life in your story.What did you find the most challenging to write about of the past and your characters?
I started with sort of a trial run of the story a few years ago, when I published my YA novel The Red Priest’s Annina, which relates Annina’s early years in Venice and is told entirely from her perspective. That novel was better received than I could have imagined, as much among adults as young readers, both male and female. I received calls, emails, and notes from people of all ages and persuasions and from all over the world, telling me how much they loved the story and how they couldn’t put it down. The one criticism I heard over and over was “It ended too soon! I want to know the rest of the story!”
As daunting as the task seemed at the time, I knew I had to re-write and expand the story from the perspectives of certain key characters. I also knew I had to delve much more deeply into the culture and politics of the opera world in early 18th-century Venice. Very little research had previously been done on this little niche of music history, so my quest involved more hunting down of obscure documents and piecing together my findings. My goal was to re-create as realistically as possible the distinctive social and musical culture of Venice in the 1720s and 30s.
My biggest challenge was finding Vivaldi’s voice, since I planned for much of Vivaldi’s Muse to be told from his perspective. I eventually achieved this by re-reading, over and over, everything he’d ever written and by immersing myself in his music. His music is so intimate, so revealing of his personality, that the more I listened the more I got to know him.

What are some of the fictional aspects to your story?

My goal in writing Vivaldi’s Muse was to reveal the true story of Vivaldi’s and Anna Girò’s relationship, a story which had never before been told in its entirety or with any basis in documented fact. As a result, all the major events in Vivaldi’s Muse are real and documented. A few minor characters, and one fairly major character (Gigi), are fictional, as I explain in a “Message to the Reader” at the end of the book. These imagined characters portray the kinds of people who no doubt would have been part of Antonio’s and Annina’s world, and in many ways they enhance the dramatic impact of the story.
As for dialogue, some is paraphrased from documents, but obviously there is no way to know exactly what people who lived nearly 300 years ago said to each other on a daily basis. So while I would not call the dialogue “fictional,” most of it grew from my interpretation of how particular characters would react to certain situations.

What book project are you working on now?

My current project is another work of historical fiction based on real people and events. I’m still in the research stage, but from the information I’ve gathered so far a story is starting to take shape. The setting is the court of Mantua around the turn of the 16th century, where a mysterious relationship develops between a young noblewoman and her favorite court composer. I don’t want to reveal too much yet except to say that the story involves marital infidelity and murder–two subjects I have not dealt with in my previous novels.

What advice would you give to an aspiring author?

Read, read, read, especially topics and genres that interest you the most. Keep a notebook of ideas that appeal to you, no matter how random or far-fetched they may seem. You’ll come back to that notebook time and again in the course of planning your story. Once you have a plan, write every day. Keep a list of scene ideas and work on developing those scenes, one by one. If you aspire to write historical fiction, realize that a great deal of research will be required. Not only must you be sure of all the facts about your characters and events, but you’ll want to familiarize yourself with the daily life and customs of the time and place. The more authentic your characters and setting are, the more engaged readers will be in your story.

Now on a more personal side? What are you currently reading?

Adventures in Two Worlds by A. J. Cronin
What do you plan on reading next?
I plan to re-read one of my all-time favorites: George Orwell’s 1984
What is your favorite literary genre?
Historical Fiction, but as you can see I enjoy other genres as well, especially the Classics.

Mostly evenings and weekends, lounging on my living room sofa.
In which format do you prefer to read in? Paperback or e-book?
Definitely paper! To me it’s just not as cozy to curl up with an e-reader.

What is your favorite quote?

“Truth is stranger than fiction, but it is because Fiction is obliged to stick to possibilities; Truth isn’t.”
~Mark Twain
Sarah thank you for your time and it was a pleasure to chat with you as always!
Author Bio:

Sarah Bruce Kelly’s passion for Vivaldi’s music began at the age of four, when her father brought home one of the first LP recordings of The Four Seasons. Her devotion to music continued to grow and manifest itself during her ensuing years of piano and voice lessons and performances.

Sarah pursued her musical studies with private teachers through her college years, while studying English literature and developing her writing skills. In 1979 she earned a Bachelor’s degree in English from the University of Richmond. Marriage and family soon followed, along with freelance work as singer and pianist.

In 1986 Sarah opened a private teaching studio, and in 1998 she returned to the University of Richmond to pursue a Masters degree in Liberal Arts, which she completed in 2002. Her research for a paper on Vivaldi’s opera career led her to the fascinating but little known story of his longtime student and friend, Annina Girò. Sarah’s deep interest in this story prompted her to continue her studies at the University of Virginia, where she earned a Master of Arts in Music degree in 2005.

In her quest for historical accuracy in telling Annina’s story, Sarah has learned Italian, roamed the streets of Venice and Vienna, and consulted 18th-century music scholars. Currently, she teaches Italian and Music History at Coastal Carolina University and Music and Latin at a private school.

Sarah has two grown children, Frankie and Mary Catherine, and lives near the South Carolina coast with her husband, Frank. She is the author of Vivaldi’s Muse as well as two historical novels for young adults: Jazz Girl and The Red Priest’s Annina.