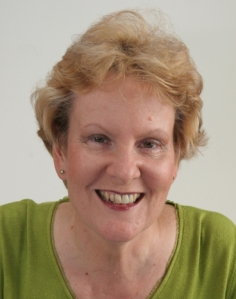 I would like to introduce Author Alison Morton. Alison grew up in Tunbridge Wells, a former spa town in South East England, and worked in the City of London, dealt in coins and antique jewellery, head-hunted chief executives, served as a reserve military officer and owned a translation company. She completed a bachelor’s degree in French, German and Economics and several years later a masters’ in history. She now lives in France with her husband.

A ‘Roman nut’ since age 11, she has visited sites throughout Europe including the alma mater, Rome. But it was the mosaics at Ampurias (Spain) that started her wondering what a modern Roman society would be like if run by women… 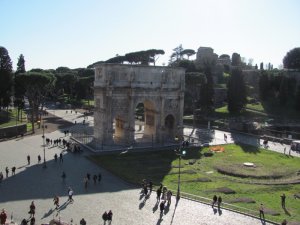 A wordsmith much of her life – playwright (aged 7), article writer, local magazine editor and translator – she came to novel writing in reaction to a particularly dire film.

‘I could do better that that,’ she whispered in the darkened cinema.

‘So why don’t you?’ came her spouse’s reply.

Three months later, she had completed the first draft of INCEPTIO, the first in her series of Roma Nova thrillers.

INCEPTIO was shortlisted for the 2013 International Rubery Book Award and awarded a B.R.A.G. MedallionTM in September 2013. The next in the series, PERFIDITAS, was published October 2013.  Alison is working on the third book SUCCESSIO.

Stepping into a book’s world is always the start of an exciting adventure, especially going back to the past to hear the clash and smash of an ancient Roman battle, admire the frocks and pelisses of Jane Austen’s Bath or even smell the stench of Victorian slums. But what if that past is an “alternate” one where history developed differently?

What if King Harold had won the Battle of Hastings in 1066? Or George Washington had failed to cross the Delaware River on Christmas night in 1776? If Boudicca had won the Battle of Watling Street and thrown the Romans out of Britain? Or that firm favourite, if Hitler had won the Second World War? More intriguing is when something that seems obscure at the time turns out to have a massive impact, e.g. the thought not occurring to Tim Berners-Lee to link up hypertext and the embryonic Internet to ease CERN scientists’ daily working lives to produce the world wide web, or, even more simply, if hadn’t rained the night before Agincourt.

So what defines alternate history?
A story can take place can take place in the past, present or future, but the point of divergence (POD) from the standard timeline must be in the past. The diverted timeline can’t be changed back by a time machine, technical gizmo or waking up and finding it’s all been a dream, or possibly a nightmare! And lastly, the narrative should show some of the consequences of the change and describe how the alternate world works.

In my Roma Nova thrillers, the trigger in the past was the final brutal suppression of paganism by Christian Roman emperor Theodosius in 395 AD that sent four hundred non-Christian Romans north to find a safe place to live. Over the following sixteen centuries, the late fourth century colony battled its way through history to become Roma Nova, a high tech, financial mini-state that retained and developed Roman values, but with a twist.  And Roma Nova’s very existence has altered the rest of the world’s history.

Stories with Romans are usually about famous emperors, epic battles, depravity, intrigue, wicked empresses and a lot of sandals, tunics and swords. But imagine the Roman theme projected sixteen hundred years further forward into the 21st century where my thriller stories of INCEPTIO and PERFIDITAS take place…

What is the most difficult thing about writing stories set in an alternate history timeline?

Reaching into the past means getting inside the heads of the characters, imagining what they see in their everyday world, what they smell, eat and touch. For stories set in a different country, writers can visit the places the characters would live in, smell the sea, touch the plants, walk under the hot blue sky, or freeze in a biting wind. But if a writer invents that country, then the task is doubled; no sources and no research visits.

Not only history, but geography and social, economic and political development must be worked out carefully; this sounds dry, but every living person is a product of their local conditions. And to keep the story plausible, it must develop in a historically logical way. I firmly believe you have to know your history before you can attempt “alternating” it!

As with all history-based fiction, research must be worn lightly and not dumped on the reader. One way to stay plausible and keep the reader engaged is to infuse, but not flood, the story with detail that reinforces the original setting the writer has introduced.  Even though INCEPTIO and PERFIDITAS are set in the 21st century, the Roman characters still say things like ‘I wouldn’t be in your sandals (not shoes) when he finds out.’  And there are honey-coated cookies (honey was big in the ancient Roman world), not bagels, in the police squad room.

Above all, when writing in an unfamiliar setting the characters should display normal emotions and behaviour. Human beings of all ages and cultures have similar needs, hurts and joys, often expressed in alienating or (to us) peculiar ways.  But the emotions of a romantic relationship are the same whether set in ancient Rome, the reign of Henry VIII or the 21st century.

Ultimately, alternate history allows your imagination to explore outside the confines of the set timeline and to introduce conflict and challenges to history in your own terms. And that’s a lot of fun! 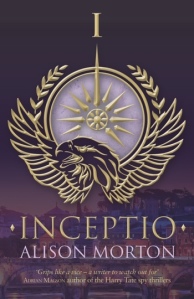 Founded sixteen centuries ago by Roman exiles and ruled by women, Roma Nova gives Karen safety, at a price, and a ready-made family in a strange culture she often struggles with. Just as she’s finding her feet, a shocking discovery about her new lover, Special Forces officer Conrad Tellus, isolates her.

And the enforcer, Renschman, is stalking her in her new home and nearly kills her. Recovering, she is desperate to find out why Renschman is hunting her so viciously. Unable to rely on anybody else, she undergoes intensive training, develops fighting skills and becomes an undercover cop. But crazy with bitterness at his past failures, Renschman sets a trap for her, knowing she has no choice but to spring it… 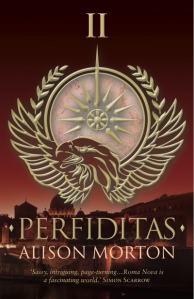 Captain Carina Mitela of the Praetorian Guard Special Forces is in trouble – one colleague has tried to kill her and another has set a trap to incriminate her in a conspiracy to topple the government of Roma Nova. Founded sixteen hundred years ago by Roman dissidents and ruled by women, Roma Nova barely survived a devastating coup d’état thirty years ago. Carina swears to prevent a repeat and not merely for love of country.

Seeking help from a not quite legal old friend could wreck her marriage to the enigmatic Conrad. Once proscribed and operating illegally, she risks being terminated by both security services and conspirators. As she struggles to overcome the desperate odds and save her beloved Roma Nova and her own life, she faces the ultimate betrayal…

You can read more about Alison, Romans, alternate history and writing here on her blog at www.alison-morton.com