Ten years ago, I called myself a poet. A writer of poetry, a critic of poetry, a teacher of poetry both old and contemporary. I loved novels, and I read them voraciously, but when I sat down to create, what came out were poems. Was I a calm, meditative person, my gaze fixed on eternity as I composed my deathless verse? No way! I was fitful, nervous, writing here and there in fifteen- or twenty-minute intervals of breathless intense concentration, sometimes between classes at my college, when a student had used that absolutely perfect word that my imagination had been seeking.

My poems ranged in subject from the painfully personal to the distantly narrative, and as I grew older, those autobiographical tendencies waned. My scholarly training was largely in the Renaissance, and I found myself teaching the eighteenth century, as well. As a researcher, I was often in the UK, seeking out materials that would help me understand the lives of women—always a central concern of mine—who had lived in the past. As a doctoral student, I was pushed, most of the time, to study the great male writers, but as a professor I wanted to fill in the gaps, to include women in my discussions. I was particularly interested in women’s spiritual and domestic lives, and this curiosity led me to read the medieval mystics Julian of Norwich and Margery Kempe. Jane Grey, Mary Tudor (“Bloody Mary”), Anne Askew—all of these women suffered for their beliefs, and I wanted to know how ordinary women might have coped with the great changes in England as it shifted from being a Roman Catholic to a Protestant country.

And something happened along the way: I became a novelist. It began one summer in Wales, when I was digging into the National Library, reading old recipe manuscripts and account books, kept by women in the seventeenth and eighteenth centuries. These books were full of personal information about debts, expenses, love matches gone awry, popular songs and sermons. This was an academic project, but reading these women’s words altered my imagination. I began to hear them talking in my head . . . and in my poems. My work got longer, almost (but not quite) reaching the right-hand margin. A friend told me, after reading these poems, “You ought to write a novel.” At the time, I said no, but the seed was planted. And one day, standing in a bookstore with an armload of historical novels, I turned to my husband and said, “I’m going to write one of these.”

And I did . . . and the stories keep coming. I began with The Altarpiece, a novel about a young nun who’s being forced out of her convent by Henry VIII’s men. She’s devout, but she’s also aware of the corruptions in the church. She struggles to find a new way to keep her old faith and to adapt herself to the changing world without losing her essential self. Her story continues in City of Ladies, to be released in October 2014 and moves right into the dangerous world of Henry’s court in the third volume, The King’s Sisters, coming out in August 2015.

And, surprisingly, my writing self has changed along with my genre. I now write every evening—or afternoon if the evening promises to be busy—in a long block of quiet, solitary time. I write until I’m exhausted. And I generally write with a newfound tranquility that comes of a long-term goal. Novelists don’t get the intermittent rewards that poets get as they place individual pieces in journals; we have to have an eye on the page in front of us and on the book that will emerge at the end. And most of the time, it’s just the writer and the page, alone, working toward the finish line. 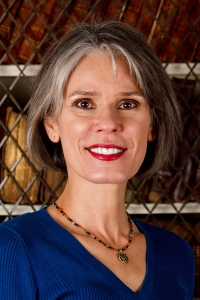 Is being a novelist a lonely calling? In some ways, I suppose it is. Most of the writers I know tend to be rather solitary individuals, and I’m no exception. I’m most content pulling weeds in my garden, feeding and watching the birds that visit the yard, and sitting with a book. I wouldn’t, however, call myself lonesome. I’m never bored, and I’m never at a loss for something to do. Characters of all kinds are always with me, demanding attention, a chance to show what they’re thinking and a stage on which to act out their lives. Sometimes, they won’t even let me alone to sleep!

I do love to travel, but even on trips abroad I like to explore places, usually historical sites, by myself, going wherever my mood or fancy strike me and investigating who lived there and what happened to them. I like to imagine even ruins filled with men and women, talking, laughing, weeping—living out their dramas. And then I return to the blank page and fill it, giving them flesh and personalities and conflicts to overcome, if they can.

And guess what? They become my friends, even the baddies, as authentic to me as many physical people I know. And with friends from everywhere—Tudor England to contemporary Virginia—I’m never, really, by myself at all.

1 thought on “One Writer’s Life by Sarah Kennedy”