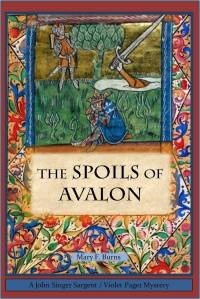 When The Spoils of Avalon Book Tour was presented to me the title drew my attention immediately. My first thought on reading the title was, ‘Cool, ancient relics….how interesting….” Then I read the book description:

The death of a humble clergyman in 1877 leads amateur sleuths Violet Paget and John Singer Sargent into a medieval world of saints and kings—including the legendary Arthur—as they follow a trail of relics and antiquities lost since the destruction of Glastonbury Abbey in 1539. Written in alternating chapters between the two time periods, The Spoils of Avalon creates a sparkling, magical mystery that bridges the gap between two worlds that could hardly be more different—the industrialized, Darwinian, materialistic Victorian Age and the agricultural, faith-infused life of a medieval abbey on the brink of violent change at the hands of Henry VIII and Thomas Cromwell.

First in a new series of historical mysteries, The Spoils of Avalon introduces two unlikely detectives and life-long friends—beginning as young people on the verge of making their names famous for the next several decades throughout Europe and America: the brilliant and brittle Violet Paget, known as the writer Vernon Lee, and the talented, genial portrait painter John Singer Sargent.

Friends from the age of ten, Paget and Sargent frequently met in the popular European watering places and capitals, frequenting the same salons and drawing rooms in London, Rome, Paris, Florence, Venice, Vienna and Madrid. Both were possessed of keen minds and bohemian tendencies, unorthodox educations and outsized egos (especially Paget). Their instant, natural bonding led them to address each other as “Twin”, and they corresponded frequently when they were apart.

Henry James once described Violet Paget as having “the most formidable mind” of their times, and he was an active fan and patron of John Sargent, introducing him to London society and his own inner circles of literary and artistic genius.

How enthralling and exciting I thought. I love a good mystery and alternating periods to weave a story is something I am highly interested in and I was curious as to how this writer would pull it off. Firstly, I would like to get the unpleasantries out of the way….because in no way have they altered how I feel about the story, I just feel a few things needed to be stronger. Without giving the plot away or spoiling the allusion of the clergymans death and how it happen….I felt that part was a bit predictable and found myself already guessing to the cause and who done it in the beginning of the first half of the story….It just needed to be a little more thought out and integrate. However, I have a knack for figuring things out in crime thrillers….and I will give the author the benefit of the doubt regarding the mystery of the who done it…maybe that was her way of getting the reader to look elsewhere for guilty party.

I will mention that the ending fell a little short for me and I wanted a couple of explanations of things that had happen and I admit I’m not sure it worked for me- as far as in the convincing department. All in all, I wanted the mystery to be more developed then it was…I’m a sucker for wanting to figure things out then being surprised when it happens another way or not entirely the way I imagined it would happen. Having said this, Burns is a brilliant writer and has great potential in history crime thrillers. Her detail to the historical aspects/details are impeccable and atmospheric. I actually learned a few things I didn’t know before and looked it up after reading this intriguing story and found I was thoroughly impressed with how she used it to weave her premise….and yes, she writes a heck of a premise.

Burns knowledge of life of a medieval abbey, the violent changes and the Dissolution of the Monasteries that was taking place during the Henry VIII reign is spot on! Her portrayal of the Victorian era and her characters speech, manner and culture was solid. I found the dialogue virtually flawless and the characters were well developed.

I will be on the lookout for more mysteries and adventures of Violet Paget and John Singer Sargent from this author. Can’t wait!

Mary F. Burns is the author of PORTRAITS OF AN ARTIST (Sand Hill Review Press, February 2013), a member of and book reviewer for the Historical Novel Society and a former member of the HNS Conference board of directors. A novella-length book, ISAAC AND ISHMAEL, is also being published by Sand Hill Review Press in 2014. Ms. Burns’ debut historical novel J-THE WOMAN WHO WROTE THE BIBLE was published in July 2010 by O-Books (John Hunt Publishers, UK). She has also written two cozy-village mysteries in a series titled The West Portal Mysteries (The Lucky Dog Lottery and The Tarot Card Murders).

Ms. Burns was born in Chicago, Illinois and attended Northern Illinois University in DeKalb, where she earned both Bachelors and Masters degrees in English, along with a high school teaching certificate. She relocated to San Francisco in 1976 where she now lives with her husband Stuart in the West Portal neighborhood. Ms. Burns has a law degree from Golden Gate University, has been president of her neighborhood association and is active in citywide issues. During most of her working career she was employed as a director of employee communications, public relations and issues management at various San Francisco Bay Area corporations, was an editor and manager of the Books on Tape department for Ignatius Press, and has managed her own communications/PR consulting business, producing written communications, websites and video productions for numerous corporate and non-profit clients.

Ms. Burns may be contacted by email at maryfburns@att.net. For more information please visit Mary Burns’s website. You can also connect with Mary on Facebook, Twitter, and Goodreads, or read her blog posts at:

Wednesday, November 5 Review at History From a Woman’s Perspective

Wednesday, November 12 Guest Post at Passages to the Past

Thursday, November 13 Review at Curling Up By The Fire