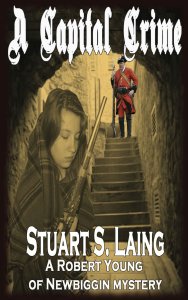 Robert Young of Newbiggin finds himself in the unusual position of working side by side with his friend Captain Charles Travers of the Edinburgh Town Guard as they investigate the murder of a popular young man.

It soon becomes apparent that the victim was more than he seemed as the investigation is drawn into political machinations with obstructions galore to contend with. Charles has also to somehow pluck up the courage to propose marriage to the girl he loves; Estelle Cannonby.

To add to their problems the Jacobite army of Bonnie Prince Charlie is about to capture the city. From the gaiety of High Society weddings and balls at Holyrood Palace to the vermin infested drinking dens on the Cowgate they have to deal with Rebellious Princes’, slave traders and a missing woman as they search for clues in a race to deliver justice before the guilty can escape

Her reply was cut off as a woman dramatically swept through the door leading to the garden calling out loudly her apologies for being so late in arriving. Her lack of decorum was only matched by her brazen appearance and beauty. Dressed in a full dress of bright red tartan with a sash of royal blue over her left shoulder decorated with a large white cockade, the emblem of the Jacobites, she strode across the room towards the bride with all the bravado of a cavalier and to the girl’s evident surprise hugged her closely and kissed her on both cheeks. “My fool of a driver got lost on the road” she exclaimed as she released the bride and stepped back to admire her. “My, but you make a bonny bride!” she exclaimed firmly as her eyes twinkled merrily without the least embarrassment at her unconventional entry. “A fair and bonny bride I say. Now let me see your new husband and I shall judge whether he is a fair match for such a beauty!” Stepping away from the poor bride who looked amazed at this vision of reckless elegance the newcomer scanned the crowd until her eyes fixed upon the groom and once again she marched forward to hug him in turn and kiss him twice. “Aye, you’ll do!” she said with a laugh that rang merrily around the silenced room as she turned to his brother. “My Lord Elcho. It is always a pleasure to meet you sir. Your brother is as handsome as you I declare. It must be that good Fife air that breeds such fine young men!”

Lord Elcho gave her a slight bow of his head in response to this flattery. Turning towards his bemused brother he said “may I introduce you to Mrs. Margaret Murray of Broughton”

The groom smiled uncertainly but gave a slight bow as the beautiful woman laughed joyfully again as she turned away from both men to scan the assembled throng who were smiling somewhat uncertainly at all this. Several of them obviously knew her and were now approaching her cautiously as though she were in some way dangerous. Turning back towards Lord Elcho she studied him briefly before giving a disapproving shake of her head. “You are lacking one final detail for your dress sir!” she said with a wagging finger towards him. “But luckily for you I have the very thing you need!” With this said she strode back to the garden door where a footman now stood holding a small silk bag which she took from him and returned to Lord Elcho and from it produced a white cockade of fine muslin which she held out to him. “Will you wear the emblem of your Prince sir?”

Lord Elcho paused briefly as though not sure that he should but then graciously accepted the cockade and fixed it his lapel while Mrs. Murray smiled with delight. “Now you are properly dressed my lord” she laughed happily as she offered another to the groom who accepted it but held it in his hand rather than pin it to his coat. The irrepressible Mrs. Murray merely smiled and turned towards the crowd who had slowly been gathering around them.

“Who else shall wear the cockade for their Prince?” she said with more laughter although there was a definite air of challenge in her words as though such an open display of reckless behaviour and open opposition to the Crown was the most natural thing in the world. Her happy eyes never left the faces before her as she held out a handful of cockades towards them and blessed each man or woman who took one with a dazzling smile.

Robert and Euphemia had stood bemused by her arrival and subsequent display and despite their own political views couldn’t help but warm towards this vision of Jacobite defiance. She was, it had to be admitted, a strikingly beautiful woman of above average height with a mass of raven black curls cascading about her flawless face and seemed completely oblivious to how her actions were being viewed by some guests. Staunch Whigs positively shied away from her and refused to even speak when she offered them a cockade but she remained completely unperturbed by these snubs. She merely smiled, laughed happily and moved on although as this was just a harmless jape with no repercussions for anyone involved. Eventually her travels around the room brought her towards Robert and Euphemia who exchanged a careful look as she drew to a halt before them.

As she held the carefully sewn cockade out towards Robert she openly appraised him with her dancing, bright and merry eyes. “Sir, shall you wear a cockade for your Prince?” she said as though such open treason was nothing to worry about although her words alone could send her to the gallows if she was reported to the authorities. Robert found himself smiling despite his own feelings and felt a strange desire to protect the young woman from herself. She acted with a childlike innocence as though her words and actions were to be seen as light hearted and not meant to offend or upset anyone despite the very nature of her every word.

With a gentle shake of his head Robert declined the proffered cockade which produced only another smile in response as she turned to Euphemia with her hand held towards her. For a second the smile faltered as she studied Euphemia closely before the smile broke out wider than ever. “I know you!” she said happily. “I have seen you in Edinburgh but we have never been introduced I fear”.

Euphemia nodded in confirmation of this as Mrs. Murray continued. “Yes, I have seen you on the High Street and thought to myself I should hate you for you are even more beautiful than men seem to find me! Tell me; are you a black hearted vicious shrew of a woman with a tongue like an adder? Please tell me you are so I can console myself that someone who looks so perfect is a monster beneath the skin!” This was all said with the same light hearted tone and smile as though she wanted to reassure Euphemia she meant no offence.

Born and raised on the east coast of Scotland in the ancient Pictish Kingdom of Fife Stuart grew up looking across the Firth of Forth towards the spires and turrets of the city of Edinburgh and its castle atop its volcanic eyrie.

He has always been fascinated by the history of Auld Reekie and has spent most of his life studying Scottish history in all its aspects whenever he finds the time between family, work and the thousand and one other things that seek to distract him.

Despite the vast panorama of Scotland’s history he always find himself being drawn back to the cobbled streets of the Old Town. Those streets have provided the inspiration for his stories and characters.

He would urge all visitors to Scotland’s ancient capital to (briefly) venture into one of the narrow closes running down from the Royal Mile to get a flavour of how alive with mischief, mayhem, love and laughter these streets once were.