When the young and beautiful Catherine Howard becomes the fifth wife of the fifty-year-old King Henry VIII, she seems to be on top of the world. Yet her reign is destined to be brief and heartbreaking, as she is forced to do battle with enemies far more powerful and calculating than she could have ever anticipated in a court where one wrong move could mean her undoing. Wanting only love, Catherine is compelled to deny her heart’s desire in favor of her family’s ambition. But in so doing, she unwittingly gives those who sought to bring her down a most effective weapon, her own romantic past. The Queen’s Mistake is the tragic tale of one passionate and idealistic woman who struggles to negotiate the intrigue of the court and the yearnings of her heart.

Catherine stood in the courtyard of Horsham, putting on her riding gloves and gazing into the dry-lipped, scowling expression of her grandmother, who had come out grudgingly to bid her farewell. A cool breeze blew across the gently rolling terrain as Catherine curtsied properly to the woman who had been more keeper than relation.

“Remember,” the dour old woman finally said, “you’re going to court with nothing beyond your passable looks and your Howard name. If you are very, very fortunate, you may become a maid of honor, but your personal state of poverty keeps you no better than the girls with whom you shared that dormitory, unless you do something bold about it. Never forget that.”

Catherine had an overwhelming urge to make a face just then or to say something spiteful in response. She had been aching to do that for years, and yet she had always been forced into compliance.

“I understand, my lady grandmother.”

Agnes arched a silver brow. “Do you? Are you certain?”

It would be impossible not to understand your contempt of me, she thought. “I do,” she said instead.

“Do you also understand, somewhere in that empty head of yours, how that lark to seduce not one but two of my servants could put you in jeopardy of never making any sort of important match at court?”

“How would anyone discover such a thing, and why would anyone care about the indiscretions of a country girl from Sussex?”

The report came tumbling out like marbles rolling across her tongue before she even knew what was happening. She stood frozen, but refused to drop her gaze from the dowager duchess’s cold stare. But this time Agnes would not dare to hit her, not when her soft skin and smooth face were the only chance in the world to regain the Howard standing. Catherine knew it and belligerently took full advantage. The silence stretched on. Catherine still did not break her gaze.

“So you do have something of your cousin Anne Boleyn in you, after all.”

“Pray only hope it is not the part that landed her on the Tower Green, separated from her head.”

Catherine felt a shiver deep in her chest, but she would not show it. “Everyone here wishes me well, as I do them. They will speak against me to no one.”

“A spurned heart is a dangerous thing.”

She was not certain whether her grandmother meant Henry Manox or Francis Dereham.

“They shall marry one day and forget the past, just as I plan to do.”

“And for your sake, and for the family’s sake, I shall pray for that, since the alternative could be ghastly.”

Suddenly, before she could say anything more, the old woman drew something from a pocket in her blue slashed bell sleeve. A ruby suspended from a silver chain glittered in the sunlight through the clouds as she held it out to Catherine.

“My husband, the duke, gave this to your mother on her wedding day. He thought it might bring her luck. It quite obviously brought her no benefit. So, since I have no use for it…”

Her words fell away as she awkwardly offered the chain to Catherine. She reached out her hand and took the precious piece of the past her grandmother offered. She had so few things by which to remember her mother. There was no painted likeness, no letter. Only one linen-and-lace chemise had been left to her—one Catherine greedily guarded. Now there was this personal offering from a woman with whom she had felt no personal connection at all before now. As they stood near the entrance to the manor, a breeze whistled softly through the bough of evergreen trees above them.

“Did she wear it?” Catherine’s voice was shallow, and she could barely force herself to speak.

“Out of duty to him, whenever she visited my husband, yes, Jocasta wore it prominently.”

So at least it had touched her skin. It had been a part of her mother, Catherine thought. Not it offered a connection to the only time in her life when she had been the recipient of real affection. Catherine placed the necklace at her own throat and clasped it behind her neck without breaking with her grandmother’s gaze. She vowed she would always wear it to remind herself of what she had lost upon her mother’s death, when she was forced to this sheltered, verdant countryside. There had been no love or affection for her here, but she would try to find that again at court… If some courtier, suitable to her uncle’s purposes might actually come to love her. She had been training herself for a long time to find just that. 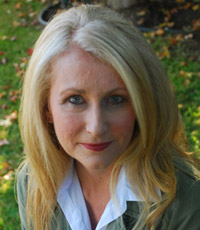 Diane Haeger, who also writes as Anne Girard, is the author of 15 historical novels, most of them based on true stories from history. Her stories are drawn from a range of countries and eras including the French Renaissance, Georgian England, the American Civil War, to a series called In The Court of Henry VIII. Her most recent novel, Madame Picasso, details an early love affair in Paris between the famous artist and his muse. Her next novel, to be published later this year, is Platinum Doll, about 1930’s movie star Jean Harlow. Haeger holds a bachelor’s degree in English literature and a master’s degree in clinical psychology. She lives in California with her husband and children.