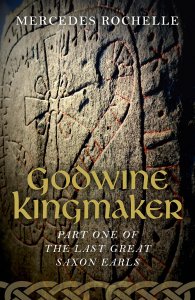 Harold Godwineson, the Last Anglo-Saxon King, owed everything to his father. Who was this Godwine, first Earl of Wessex and known as the Kingmaker? Was he an unscrupulous schemer, using King and Witan to gain power? Or was he the greatest of all Saxon Earls, protector of the English against the hated Normans? The answer depends on who you ask. He was befriended by the Danes, raised up by Canute the Great, given an Earldom and a wife from the highest Danish ranks. He sired nine children, among them four Earls, a Queen and a future King. Along with his power came a struggle to keep his enemies at bay, and Godwine’s best efforts were brought down by the misdeeds of his eldest son Swegn. Although he became father-in-law to a reluctant Edward the Confessor, his fortunes dwindled as the Normans gained prominence at court. Driven into exile, Godwine regathered his forces and came back even stronger, only to discover that his second son Harold was destined to surpass him in renown and glory.

I’d like to first say that this period in English history is probably without a doubt my favorite. I am quite the critic when it comes to reading historical fiction during this extraordinary time…when I saw this book tour available for this book, I knew that I had to read this story. I wanted to know how seriously Rochelle takes her history and how she will portray this period and the people. I’d have to say I was thoroughly fascinated with her look into this time. She gives you a really good sense of it if you will. That’s what I want in a story. To be transported back.

This story centers on Harold Godwineson’s Father, Godwine. He became Earl of Wessex under King Canute. For those of you who don’t know, Canute is Danish by birth. He and his father conquered England. I highly recommend you read up on King Canute.

Anyhow, I really have never had an opinion about Godwine. I knew he was powerful and how he got his power. I have always been more interested in his son Harold-the last king of the Saxon rule. They were both two powerful men in their own right. Although what Godwine built for his families power was amazing! It really is extraordinary how he rose from his commoner status and how his family rose even further with Harold. This story shows Godwine’s power and intelligence-I think-perfectly. The story begins with him as a young boy who was befriended by the Danes. By chance really and was befriended by King Canute. This is that story and more. A brilliant story at that. Gosh there is so much to this story and I could go on and on about it. But instead of me doing that, I really encourage you to read the book.

I will caution those who are critical of authors for taking liberties regarding the historical aspects of a story. I will say this with a firm voice, “This is Historical Fiction!” I did spot some of that in this story and even asked the author about one particular scene via social media. How she explained it to me worked perfectly in her story. Matter of fact there is a part of history about a piece of land that Canute and Godwine was viewing and where Canute was telling Godwine about it is where she took some liberty. Still she kept it believable and I actually want to do further study on it. So thank you, Rochelle for including the scene in your story. Readers, I can’t tell you what it is because I don’t want to give spoilers….so go read it and find out!

I adore the authors writing style, premise, how she brought it all together. She knows how to write historical fiction and I can’t WAIT for the second book to come out. I hope it will be soon! I’m rating this book five stars. Thank you, Rochelle for a fine story. We readers of history do appreciate it.

Oh, and one last thing….I pretty much agree with Rochelle’s portrayal of the Normans! Ha! 🙂 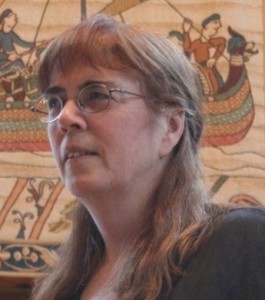 Born in St. Louis MO with a degree from University of Missouri, Mercedes Rochelle learned about living history as a re-enactor and has been enamored with historical fiction ever since. She lives in Sergeantsville, NJ with her husband in a log home they built themselves.

Saturday, April 25 Spotlight at With Her Nose Stuck in a Book

Monday, May 4 Review at Impressions in Ink Character Interview at Boom Baby Reviews

Tuesday, May 5 Guest Post & Giveaway at Passages to the Past

Thursday, May 7 Review at Bookramblings Spotlight at The Never-Ending Book

Friday, May 8 Review at Layered Pages