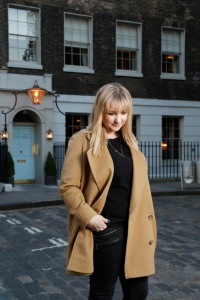 I have the great pleasure of welcoming Laura Powell to Layered Pages today. Laura is a Features Commissioning Editor at the Daily Telegraph. She has written for The Guardian, Daily Mail, Mail on Sunday and various magazines. She was awarded a New Writer’s Bursary from Literature Wales and was named as one of Amazon’s Rising Stars. She grew up in South Wales and now lives in London. The Unforgotten is her first novel.

Laura, thank you so much for talking with me today about your book, The Unforgotten. What a stunning debut! I enjoyed your story and I love the complexities of your characters. Tell me how you came to write this story?

Thanks so much – it still feels funny to hear that other people have read about the world that lived in my head only for so long. I started writing it one Sunday afternoon when my then-boyfriend was in football practice. I’d been on Facebook and had seen an old face that brought back so many memories. Out of the blue I started writing a dark, sort-of love story about someone who was in a relationship but was never sure whether her feelings were returned or not. By the end of the day I’d written two chapters. I’ve since weaved in lots of other elements – murder, mental illness, moral dilemmas. But that bittersweet love story remains the core for me.

What is the premise of your story?

It’s a forbidden love story between a 15-year-old girl Betty and a 30-year-old journalist Gallagher set in 1950s Cornwall. They’re from different classes, different worlds – but their relationship becomes very deep, very fast. They meet when Gallagher arrives in the fishing village where Betty lives to report on a series of murders – but they soon make a discovery related to the murders. And they are each faced with a huge dilemma that tests their feelings for the other and questions their morality. The devastating consequences of that decision unravels over the next 50 years.

What is the mood or tone your characters portray and how does this affect the story?

It is very dark, bleak but there is also a hopefulness and a lightness to it, which I hope shines through. Though ultimately I’m a sucker for a weepy book or film so…

How is your character(s) influenced be their setting?

The main character, Betty, is 15 and has hardly ever left her hometown of St Steele – a fictional Cornish fishing village – aside from going to the occasional dance in the neighbouring town. She travels outside that area for the first time in her life in the book – first to St Ives, a real Cornish town. And later, to London. Taking her away from that setting makes her even more vulnerable than she always has been, but also really tests her, as she has been so insulated (geographically speaking) all her life.

I chose to write about Cornwall because it’s my favourite part of the country. I’m Welsh. I now live in London. And I studied in the West Midlands (Warwick). Yet I’ve been to Cornwall – usually St Ives – every year since I was born, sometimes twice or three times. I love the town, it is full of happy memories with friends and family, so it was wonderful to ‘live’ there in my head for so long when writing. Yet I didn’t want to be tied to a real place so I invented St Steele. It’s loosely based on a teeny cove called Porthgwidden in St Ives that is just gorgeous. Making it a fictional place gives you a lot more freedom to move around, and to pick up a building or a street and drop it elsewhere if that benefits the plot, rather than being tied down to the truths of history.

Please tell your audience a little about Dolores Broadbent.

Dolores is the third main character. She is the mother of Betty, the main character. And she runs the guest house in St Steele. She was by far the easiest character to write and I had such a clear vision of her – a little like Julianne Moore’s character in A Single Man (the beautiful Tom Ford-directed film with Colin Firth.) She is beautiful and glamorous and whimsical but damaged and broken. She once had any man she wanted, she wafted about and was carefree. But now she is older, widowed, with little money, failing looks and a daughter of 15 who is not at all as she was, she is finding it hard to come to terms with her lot and as a result, can be quite violent and brutal. I loved her complexity. I hope people have the same sympathy for her that I do.

What are the changing emotions you have as a writer?

I’ve probably gone through every feeling on the spectrum. But if I’m honest, the one thing I always feel is disappointed. I wonder why I wrote that terrible line, why this or that isn’t working as well as I’d like it to, I’m constantly critiquing my writing and pulling it apart. I’m a bit of a malcontent. But I’m teaching myself not to be. Slowly.

What are your personal motivations in story-telling?

Another book. I don’t want to say too much in case I jinx it but it’s dark and historical and layered with mystery that unravels over the years, based on a catastrophic fictional event in our pasts. The idea has been bubbling in my head for years and I’m really enjoying delving in!

What is your writing process?

I’m afraid it’s an approach I can’t recommend for others but it works for me – ‘feast and famine’ is probably the best description. I spend weeks obsessed with writing the book; I think about it, write every spare second I have, late into the night and early into the morning, I write bits on the Notes of my phone, on my laptop when I’m on buses and trains, on scrawled napkins in cafes, then back to my laptop that night. Even when I’m with friends I’m thinking about the book… Then I crash. And spend a few weeks sleeping, reading, working, living etc – before I begin writing again. This is just for the first and second drafts I should add – I’d go mad if I was like that permanently. The later editing processes are much more methodical and orderly and calming. But that early writing stage is all a bit, well, obsessive!

Where can readers buy our book?

Amazon, Waterstones or Freight Books. Here are the links! If you read it, I’d love to know what you think – I’m on Twitter @laurapow1