I adore mystery and historical Fiction combined into a story. Today I am sharing with you, the Sebastian St. Cyr Series by C.S. Harris. I am currently reading, What Angels Fear and hope to continue with the other books this year. So little time! Anyhow, below are the ones I want to get to next plus the one I’m reading right now. What is on your wish-list?

It’s 1811, and the threat of revolution haunts the upper classes of King George III’s England. Then a beautiful young woman is found raped and savagely murdered on the altar steps of an ancient church near Westminster Abbey. A dueling pistol discovered at the scene and the damning testimony of a witness both point to one man, Sebastian St. Cyr, Viscount Devlin, a brilliant young nobleman shattered by his experience in the Napoleonic Wars.

Now a fugitive running for his life, Sebastian calls upon his skill as an agent during the war to catch the killer and prove his own innocence. In the process, he accumulates a band of unlikely allies, including the enigmatic beauty Kat Boleyn, who broke Sebastian’s heart years ago. In Sebastian’s world of intrigue and espionage, nothing is as it seems, yet the truth may hold the key to the future of the British monarchy, as well as to Sebastian’s own salvation…

Brighton, England, 1811. The beautiful wife of an aging Marquis is found dead in the arms of the Prince Regent. Draped around her neck lies an ancient necklace with mythic origins-and mysterious ties to Sebastian St. Cyr, Viscount Devlin. Haunted by his past, Sebastian investigates both the Marchioness’s death and his own possible connection to it-and discovers a complex pattern of lies and subterfuge. With the aid of his lover, Kat Boleyn, and a former street urchin now under his protection, Sebastian edges closer to the killer. And when one murder follows another, he confronts a conspiracy that threatens his own identity…and imperils the monarchy itself. 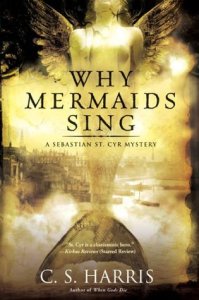 It’s September 1811, and someone is killing the wealthy young sons of London’s most prominent families. Partially butchered, with strange objects stuffed into their mouths, their bodies are found dumped in public places at dawn. When the grisly remains of Alfred, Lord Stanton’s eldest son are discovered in the Old Palace Yard beside the House of Lords, the local magistrate turns to Sebastian St. Cyr, Viscount Devlin, for help.

Ranging from the gritty world of Thames-side docks to the luxurious drawing rooms of Mayfair, Sebastian finds himself confronting his most puzzling–and disturbing–case yet. With the help of his trusted allies–young servant Tom, Irish doctor Paul Gibson, and his lover Kat Boleyn–Sebastian struggles to decipher a cryptic set of clues that link the scion of a banking family to the son of a humble Kentish vicar. For as one killing follows another, Sebastian discovers he is confronting a murderer with both a method and a purpose to his ritualized killings, and that the key to it all may lie in the enigmatic stanzas of a haunting poem…and in a secret so dangerous that men are willing to sacrifice their own children to keep the truth from becoming known.

London, 1812. The brutal slaughter of eight young prostitutes in a house of refuge near Covent Garden leaves only one survivor- and one witness: Hero Jarvis, reform-minded daughter of the Prince Regent’s cousin, Lord Jarvis. When the Machiavellian powerbroker quashes any official inquiry that might reveal his daughter’s unorthodox presence, Hero launches an investigation of her own and turns to Sebastian St. Cyr, Viscount Devlin, for help.

Working in an uneasy alliance, Hero and Sebastian follow a trail of clues leading from the seedy brothels and docksides of London’s East End to the Mayfair mansions of a noble family with dark secrets to hide. Risking both their lives and their reputations, the two must race against time to stop a killer whose ominous plot threatens to shake the nation to its very core.

What Remains of Heaven

Another gripping mystery in the series that has won six starred reviews, set in the glittering yet dangerous world of 1812 London, where nobleman and former spy Sebastian St. Cyr courts personal disaster in his effort to expose a murderer.
The latest request for help from Sebastian St. Cyr, Viscount Devlin–from the Archbishop of Canterbury, no less–is undeniably intriguing: The bodies of two men have been found in an ancient crypt, their violent deaths separated by decades. One is the Bishop of London, the elderly Archbishop’s favored but controversial successor. The identity of the other seems lost in time, although his faded velvet attire marks him as gentleman of the eighteenth century.

To Sebastian’s consternation, the last person to see the Bishop alive was Miss Hero Jarvis, a woman whose already strained relationship with St. Cyr has been complicated by a brief, unexpectedly passionate encounter. It also soon becomes obvious that her powerful father has reasons of his own for wanting the Bishop out of the way. In an investigation that leads from the back alleys of Smithfield to the power corridors of whitehall, Sebastian amasses a list of suspects that ranges from some of the Prince Regent’s closest cronies to William Franklin, embittered son of famous American patriot Ben Franklin. Each step Sebastian takes toward the killer brings him closer to a devastating truth that could ultimately force him to question who–and what–he really is.

Regency London: July 1812. How do you set about solving a murder no one can reveal has been committed?

That’s the challenge confronting C.S. Harris’s aristocratic soldier-turned-sleuth Sebastian St. Cyr when his friend, surgeon and “anatomist” Paul Gibson, illegally buys the cadaver of a young man from London’s infamous body snatchers. A rising star at the Foreign Office, Mr. Alexander Ross was reported to have died of a weak heart. But when Gibson discovers a stiletto wound at the base of Ross’s skull, he can turn only to Sebastian for help in catching the killer.

Described by all who knew him as an amiable young man, Ross at first seems an unlikely candidate for murder. But as Sebastian’s search takes him from the Queen’s drawing rooms in St. James’s Palace to the embassies of Russia, the United States, and the Turkish Empire, he plunges into a dangerous shadow land of diplomatic maneuvering and international intrigue, where truth is an elusive commodity and nothing is as it seems.

Meanwhile, Sebastian must confront the turmoil of his personal life. Hero Jarvis, daughter of his powerful nemesis Lord Jarvis, finally agrees to become his wife. But as their wedding approaches, Sebastian can’t escape the growing realization that not only Lord Jarvis but Hero herself knows far more about the events surrounding Ross’s death than they would have him believe.

Then a second body is found, badly decomposed but bearing the same fatal stiletto wound. And Sebastian must race to unmask a ruthless killer who is now threatening the life of his reluctant bride and their unborn child.

And of course…. the rest of the series!

Here are some of the wishlists from a few of my friends this month: