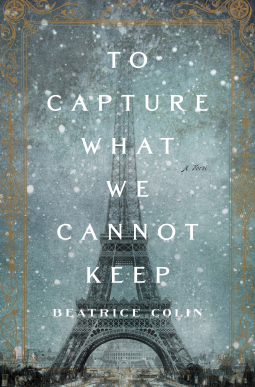 In February 1887, Caitriona Wallace and Émile Nouguier meet in a hot air balloon, floating high above Paris, France–a moment of pure possibility. But back on firm ground, their vastly different social strata become clear. Cait is a widow who because of her precarious financial situation is forced to chaperone two wealthy Scottish charges. Émile is expected to take on the bourgeois stability of his family’s business and choose a suitable wife. As the Eiffel Tower rises, a marvel of steel and air and light, the subject of extreme controversy and a symbol of the future, Cait and Émile must decide what their love is worth.

Seamlessly weaving historical detail and vivid invention, Beatrice Colin evokes the revolutionary time in which Cait and Émile live–one of corsets and secret trysts, duels and Bohemian independence, strict tradition and Impressionist experimentation. To Capture What We Cannot Keep, stylish, provocative, and shimmering, raises probing questions about a woman’s place in that world, the overarching reach of class distinctions, and the sacrifices love requires of us all.

As I’m sure most of the people in the world know of the Eiffel Tower in Paris, France. It has always been a deep fascination for me. I have to admit growing up I questioned why it was built but never really wondered at who built it and the ingenuity that went into it. As I got a bit older, I did think on that and about the people who built the tower. I was delighted when this book came along. During that era, the tower became the largest man-made structure in the world. As it was being constructed, many people doubted it’s success. The tower-of course-proved its grandeur.

In To Capture What We Cannot Keep we meet Émile Nouguier, the engineer and co-designer of the Tower. He meets a Scottish woman Cait-who is a chaperone for two rich, spoiled older young adults. Throughout the story of Emile’s, Cait and her charges become the center focus and how life deals with them. Or rather how they deal with life. We are also introduced to a supporting cast of a collective group of people.

The storyline of the tower being built was genius and the author gives such wonderful insight of the process. Alas, the overall plot dragged for me about almost half way through and I felt the relationship between Cait and Emile was poorly told. I kept wondering when it was going to happen! The Romance that is….I wasn’t convinced of the appeal they had for each other or the love for that matter. The main characters frustrated me, and the story left me just wanting to read about the Tower, Paris, the art world and nothing else.

Having said that, many parts of the story was atmospheric and resonated Paris of that time. The author did a good job getting you into that world and attitudes of the people. There are also some morality issues that play a part in this book and the character’s predicaments were rather interesting.

I rated this book three Stars.

2 thoughts on “Book Review: To Capture What We Cannot Keep by Beatrice Colin”