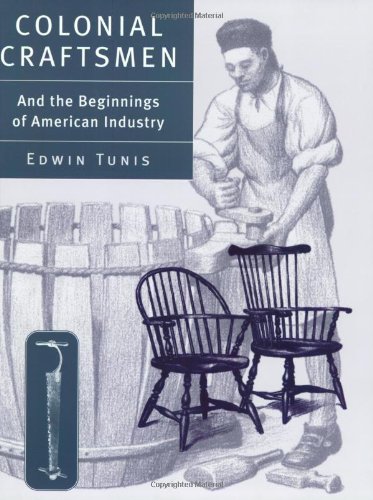 While my current focus of American History is on what many call, “The American Civil War” (1861-1865), I am also interested in the beginnings of the American Industry. I am thoroughly fascinated with colonial craftsmanship. From time to time while studying the civil war, I often mark and file research material that relate for other stories I have a mind to write about or explore. On Amazon I came across, Colonial Craftsmen: And the Beginnings of American Industry by Edwin Tunis and was thrilled! I have been looking for something like this for a while.  I have added it to my wish-list research pile of books I want to purchase next year or the years after. For all you American History enthusiast, I thought this might be of interest of you.

The vanished ways of colonial America’s skilled craftsmen are vividly reconstructed in this superb book by Edwin Tunis. With incomparable wit and learning, and in over 450 meticulous drawings, the author describes the working methods and products, houses and shops, town and country trades, and individual and group enterprises by which the early Americans forged the economy of the New World.

In the tiny coastal settlements, which usually sprang up around a mill or near a tanyard, the first craftsmen set up their trades. The blacksmith, cooper, joiner, weaver, cordwainer, and housewright, working alone or with several assistants, invented their own tools and devised their own methods. Soon they were making products that far surpassed their early models: The American ax was so popular that English ironmongers often labeled their own axes “American” to sell them more readily. In the town squares a colonist could have his bread baked to order, bring in his wig to be curled, have his eyeglasses ground, his medicine prescription filled, or buy snuff for his many pocket boxes. With the thriving trade in “bespoke” or made-to-order work, fine American styles evolved; many of these are priceless heirlooms now―the silverware of Paul Revere and John Coney, redware and Queensware pottery, Poyntell hand-blocked wallpaper, the Kentucky rifle, Conestoga wagon, and the iron grillework still seen in some parts of the South. The author discusses in detail many of the trades which have since developed into important industries, like papermaking, glassmaking, shipbuilding, printing, and metalworking, often reconstructing from his own careful research the complex equipment used in these enterprises.

The ingenious, liberty-loving artisans left few written records of their work, and only Mr. Tunis, with his painstaking attention to authentic detail and his vast knowledge, could present such a complete treasury of the way things were done before machines obliterated this phase of early American life.