American History and Literature is of great importance to me. Right now I’m in the middle of studying extensively the War Between the States but often times in my research I need to go back further than that. Doing so gives me a greater understanding of the creation of our great nation, how our government works, how they evolved and what was in the minds of our early settlers and founders. In today’s society, there are so many Americans who do not know their history and do not know what it means to be an American. For many reasons- I won’t go into today-but I will say much of the blame goes to the public school system and our government. We have become a nation of political correctness and we are erasing our history. In my opinion that shows weakness and cowardliness on our part and should be stopped. On Facebook I shared a quote that says, “A nation which does not remember what it was yesterday, does not know where it is today.” The rest of the quote-by Woodrow Wilson-say’s, “…nor what it is trying to do. We are trying to do a futile thing if we do not know where we came from or what we have been about.”

Today’s wish-list is one I am actually putting at the top of my reading pile soon. Some of these works I am familiar with and have read a bit of. Alas, it has been years and I would like to refresh my mind with these readings.

Anne Bradstreet, the first true poet in the American colonies, wrote at a time and in a place where any literary creation was rare and difficult and that of a woman more unusual still. Born in England and brought up in the household of the Earl of Lincoln where her father, Thomas Dudley, was steward, Anne Bradstreet sailed to Massachusetts Bay in 1630, shortly after her marriage at sixteen to Simon Bradstreet. For the next forty years she lived in the New England wilderness, raising a family of eight, combating sickness and hardship, and writing the verse that made her, as the poet Adrienne Rich says in her Foreword to this edition, “the first non-didactic American poet, the first to give an embodiment to American nature, the first in whom personal intention appears to precede Puritan dogma as an impulse to verse.”

All Anne Bradstreet’s extant poetry and prose is published here with modernized spelling and punctuation. This volume reproduces the second edition of “Several Poems,” brought out in Boston in 1678, as well as the contents of a manuscript first printed in 1857. Adrienne Rich’s Foreword offers a sensitive and illuminating critique of Anne Bradstreet both as a person and as a writer, and the Introduction, scholarly notes, and appendices by Jeannine Hensley make this an authoritative edition.

Adrienne Rich observes, “Intellectual intensity among women gave cause for uneasiness” at this period–a fact borne out by the lines in the Prologue to the early poems: “I am obnoxious to each carping tongue/ Who says my hand a needle better fits.” The broad scope of Anne Bradstreet’s own learning and reading is most evident in the literary and historical allusions of “The Tenth Muse,” the first edition of her poems, published in London in 1650. Her later verse and her prose meditations strike a more personal note, however, and reveal both a passionate religious sense and a depth of feeling for her husband, her children, the fears and disappointments she constantly faced, and the consoling power of nature. Imbued with a Puritan striving to turn all events to the glory of God, these writings bear the mark of a woman of strong spirit, charm, delicacy, and wit: in their intimate and meditative quality Anne Bradstreet is established as a poet of sensibility and permanent stature. 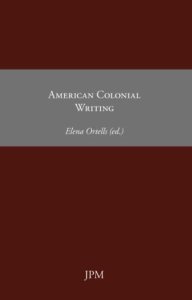 This anthology features a selection of works written during the first century of English settlement in the colonies of North America. These texts illustrate the extraordinary depth of colonial writing (chronicles, poetry, captivity narratives, etc.) and help us understand the origins and the future of America and Americans.

Widely admired for its vivid accounts of the slave trade, Olaudah Equiano’s autobiography — the first slave narrative to attract a significant readership — reveals many aspects of the eighteenth-century Western world through the experiences of one individual. The second edition reproduces the original London printing, supervised by Equiano in 1789. Robert J. Allison’s introduction, which places Equiano’s narrative in the context of the Atlantic slave trade, has been revised and updated to reflect the heated controversy surrounding Equiano’s birthplace, as well as the latest scholarship on Atlantic history and the history of slavery. Improved pedagogical features include contemporary illustrations with expanded captions and a map showing Equiano’s travels in greater detail. Helpful footnotes provide guidance throughout the eighteenth-century text, and a chronology and an up-to-date bibliography aid students in their study of this thought-provoking narrative.

In February 1676, during King Philip’s War, the frontier village of Lancaster, Massachusetts, was attacked by a party of Nipmuck Indians and completely destroyed. As relief from Concord approached, the attackers withdrew, taking with them 24 captives, including Mrs. Mary Rowlandson and her three children.

For almost three months the little family was forced to live with their captors and endure exposure to a New England winter.The youngest child, who had been injured during the attack, failed to survive. Eventually ransom was paid and the family released.

Mrs. Rowlandson’s account of her experience was published in 1682. It became a”best-seller” of its day and created a new literary genre, the captivity narrative. Such accounts were in part responsible for the mistrust and hatred of the Indians that plagued the country for centuries. It is also the first publication in English by a woman in the New World.

The Puritan Dilemma: The Story of John Winthrop (Library of American Biography) by Edmund S. Morgan

Caught between the ideals of God s Law and the practical needs of the people, John Winthrop walked a line few could tread. In every aspect of our society today we see the workings of the tension between individual freedom and the demands of authority. Here is the story of the people that brought this idea to our shores: The Puritans. Edmund Morgan relates the hardships and triumphs of the Puritan movement through this vivid account of its most influential leader, John Winthrop. The titles in the Library of American Biography Series make ideal supplements for American History Survey courses or other courses in American history where figures in history are explored. Paperback, brief, and inexpensive, each interpretive biography in this series focuses on a figure whose actions and ideas significantly influenced the course of American history and national life. In addition, each biography relates the life of its subject to the broader themes and developments of the times.”

Here are the wish lists from a few of my friends this month: