Lady Jolene’s antagonists and how she deals with them.

As the oldest child and senior daughter to The Right Honorable, The Earl and Countess of Hampshire, Lady Jolene Markson is supposed to be able to hold her emotions in check. Nothing should upset or worry her.

Well, that’s not entirely true. There are several people and groups which annoy her to no end. Her antagonists.

At the top of this list is the Metropolitan Police Service, the Met.

As with her parents who had to deal with Bow Street and their runners, Jolene finds the Met to be useless for the most part. Frequently she points out they will find a suspect, guilty or not, and claim they have the criminal. More often than not this person hires her to prove their innocence, which she does with great regularity.

When presented with a case Lady Jolene does her best to make sure they, the Met, learn nothing of what she has found. It’s not that she wishes to make them look bad, they can do that without her assistance. 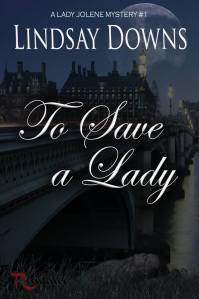 In the case set forth in To Save a Lady she easily proves to the investigating officer, Thomas Spencer, there was no way his prime suspect, Miss Julia Patrick, could have murdered the young man. He then offers his, without his superiors’ knowledge, assistance in bringing the criminal(s) to justice.

At first Lady Jolene had her reservations about allowing Spencer to partake. Her thoughts change when she notices an affection developing between him and Julia. Eventually Jolene comes to trust him but makes it very clear Spencer is the exception as she will still work to embarrass the Met.

It goes without saying, but I will anyways, her younger brothers and sisters do tend to antagonize her. With them, depending on what they do she usually doesn’t tell on them but deals with the troublesome one on her own.

Without a doubt, though, Lady Jolene’s worst antagonist is none other than The Most Honorable, The Marquis of Lange aka. Brendon.

They had first met years ago and for the most part grew up together. The reason, his parents and her godparents are His and Her Grace, The Duke and Duchess of Clarion.

For Lady Jolene his most annoying trait, sticking his nose into things that aren’t any of his business. He tries to steer her away from possible danger and she constantly resists. Even though they tend to be at each other’s throats at times it is in reality more of a love-hate-love relationship.

She does have one way, and it’s priceless, of keeping him in line. Her collie, Samson. More often than not the dog achieves the desired purpose. Annoy Brendon by his presence.

Well, my good ladies and gentlemen those are the primary antagonists in Lady Jolene’s life. Yes, Stephanie asked for five of them and I presented three. Well, actually more if you were to count her siblings, the officers at The Met along with Brendon and the years of antagonism between him and Jolene.

If I was a nice guy, of course then I wouldn’t be driving my readers crazy with red herrings and cliffhangers I would tell you a secret. Then again, if I did that then it would be a secret. You’ll have to buy To Save a Lady.

I’ve been an avid reader ever since I was old enough to hold a red leather bound first edition copy of Sir Walter Scott’s The Lady of the Lake in my lap.

So, it only seemed natural at some point in my life I take up pen and paper to start writing. Over time my skills slightly improved which I attribute to my English teachers.

My breakthrough came about in the mid 1970’s when I read a historical romance written by Sergeanne Golon, Angelique. This French husband and wife team opened my eyes to the real world of fiction. Stories about romance, beautiful damsels, handsome heroes and plots which kept me hooked. Of course, being a man, I had to keep my reading hidden from others as that wasn’t appropriate reading for men.

With this new-found appreciation of the written word I took up other books and devoured them as a starving person would a plate of food. I them attempted to write again. I still wasn’t satisfied so I put it aside for years as other events entered my life.

Finally, in the early years of the new millennium I tried again to write and once again met with limited success. At least now I was able to get past the first page or two. Then, in 2006 a life changing event brought me back to my love, I took a job as a security officer. This allowed me plenty of time to read different genres.

My favourite was regency. As I poured through everyone I could get my hands on I knew this could be something I wanted to attempt.

Since 2012 when my debut regency romantic suspense released I was hooked and have, except for a few contemporaries, focused on this genre.

Since 2012 I’ve lived in central Texas. I’m also a member of Romance Writers of America and the Austin, TX chapter.

Where you can find me-

1 thought on “Characters in Motion With Lindsay Downs”