Q: The Tuscan Child takes place in both the 1940s, where readers get glimpses of Hugo Langley’s experience as a soldier in World War II, and the 1970s, where we follow Hugo’s daughter Joanna as she tries to unpack the mystery of her father’s life. Rhys, where did you get the idea for this two-part, multigenerational narrative, and how did you go about balancing the narrative between the two difference eras?

A: I have always loved books that take place in multiple time periods, but this was a challenge for me, as I’d never tried to write that kind of story myself. But I’d been dying to write about Tuscany, where I was writer-in-residence last summer and will be again next summer. So the place is already special to me, and I thought it would be fun to write a mystery about what happened to Joanna’s father in WWII.

As to balancing the narratives: I wrote Hugo’s story first, then Joanna’s story. Then I physically placed the chapters in Joanna’s story all the way down my hallway and decided where to slot in Hugo’s chapters. It worked well!

Q: Joanna is a wonderful female protagonist. What was your inspiration for her character, and how does she differ from some of your other leading ladies?

A: Some of my leading ladies have been feisty and had great support groups. Joanna is different in that she’s more vulnerable: she has grown up without a mother, in a difficult environment, and we meet her at a low point in her life. So the challenge was not to make her a victim but to allow her to rise and triumph through her own efforts.

Q: Much of this book takes place in Tuscany in the 1940s and 1970s — what kind of research did you have to do to write about this area and those time periods authentically? Did you travel to Italy while doing research for the novel and if so, what did that involve?

A: I’ve been to Tuscany several times, starting when I travelled with my aunt first in my teens, then my 20s. So I had actually been in Italy around the time Joanna visited. I stayed with my husband in my college friend’s flat near Cortona one year and played at being an Italian housewife (which worked well until I went to the butcher to order a chicken, and I got the whole bird, including head and feet!) And as I mentioned, I was writer-in-residence conducting a workshop in Chianti last year. The professor who runs the workshop is from an old Tuscan family, so I used him to check my facts.

As for getting everything right about WWII, I stayed with other college friends in Lincolnshire and visited WWII airbases that are now museums. I looked at planes, parachutes, letters home, helmets, and flight suits, and I met experts who told me more than I actually needed to know about the Blenheim Bomber (experts are always keen to share their subject!).

Q: Your last novel, In Farleigh Field, also focused on World War II. What do you find so fascinating about that period in history, and why do you think it makes for such a rich setting for writers of historical fiction?

A: I have always found the era fascinating, I suppose because I was born in the middle of it and my family had to endure it. I grew up with tales of bombings, of my father’s experiences in Egypt with the Eighth Army, and I was always impressed with how matter-of-fact the stories were. People were so brave and took it for granted that they should do “their bit” to win the war, whatever it took.

I think it resonates with readers particularly now that we are going through a troubled time. Many people feel insecure, and we don’t know where our world is heading. So it’s comforting to read about a period when the good guys did win!

A: History and mystery are a perfect blend! Think of the foggy streets of old London, misty castles, the terrific motives for murder: “I love another, but I am not free!” In this case we have the heightened drama of war: small human interpersonal conflict against the background of world conflict.  The stakes couldn’t be higher.

Q: When people think about World War II, they often think about it in terms of what happened in Britain, Germany, or France. Italy, on the other hand, is often considered the forgotten front of WWII — what made you want to write a novel that dealt with WWII Italy in particular?

A: I remember visiting a small town that had a memorial to the townspeople massacred by the Germans for hiding partisans. A whole town gunned down! That stuck with me.  And I think we tend to forget that Italy suffered twice. Under Mussolini they were sent to fight in Africa and were invaded by the Allies, and then when the population turned and refused to help the Germans, they were literally starved to death and had awful punishments inflicted upon them, while their towns were bombed by the Allies.

Q: We have to ask — what are you working on next?

A: In the New Year I begin yet another stand-alone novel for Lake Union. This one is not about WWII but about WWI. It’s about a young woman who becomes a land girl, against the wishes of her parents, and about a group of women who have to adapt and take over men’s jobs after their husbands and sons are killed on the front. Its title at the moment (which might change) is The Healing Garden. 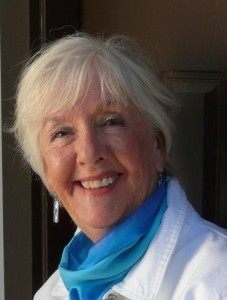 Rhys Bowen is the New York Times bestselling author of over thrity mystery novels. Her work includes In Farleigh Field, a standalone novel of World War II; the Molly Murphy mysteries, set in 1900’s New York City; the Royal Spyness novels, featuring a minor royal in 1930’s England; and the Constable Evans mysteries about a police constable in contemporary Wales. Rhy’s works have won multiple Agatha, Anthoony, and MacAvity awards. Her books have been translated into many languages, and she has fans from around the world, including 12,000 who visit her Facebook page daily. She is a transplanted Brit who now divides her time between California and Arizona. Connect with her at her website.

2 thoughts on “A Conversation with Author Rhys Bowen”