Thank you for chatting with me today, Tony! Please tell me about your latest book, MARY –Tudor Princess. 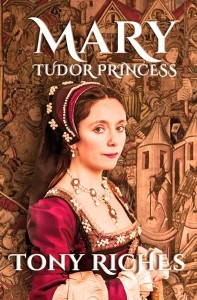 Hi Stephanie, thanks for inviting me. I researched Mary Tudor’s early life for my last book, Henry – Book Three of the Tudor Trilogy. In the Tudor Trilogy I’d moved forward one generation with each book, so it appealed to me to write a ‘sequel’ which did the same. I’d become intrigued with Mary’s story of how she risked everything to defy her brother, King Henry VIII.

How did you come to write stories about the Tudors and what captivates you about them?

I was born in Pembroke, within sight of the castle where Henry Tudor was born, so I’ve always been keen to know more about how he became King of England. My research has taken me to some amazing places. I followed the footsteps of Jasper and Henry Tudor to their exile in remote Brittany and visited Henry’s magnificent tomb in Westminster Abbey. I’ve become an expert on the Tudor dynasty and want to help readers understand the true stories behind the myths. Last year I was part of a community group which raised the money for a statue of Henry Tudor in front of Pembroke Castle, so his importance to the town will never be forgotten. 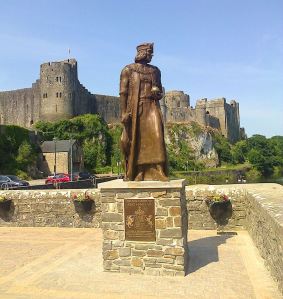 Mary was Henry’s closest living relative, as neither got on well with their sister Margaret, (who’d been married off to the King of Scotland at the age of fourteen). Mary didn’t seem to mind when Henry married her off to the fifty-two-year-old King Louis XII of France. Although Mary was barely eighteen at the time, Henry saw his younger sister as a small price to pay for a treaty with France. The problems between them began when Henry turned his back on Queen Catherine, as Mary was one of the few who dared to speak out against Anne Boleyn.

What sets your story apart from other Tudor Stories?

This book has the benefit of the three others in the trilogy which explore how Mary Tudor’s world developed from the beginnings of the Tudor dynasty. Although Mary – Tudor Princess can be read on its own, the Tudor Trilogy means I’ve had the opportunity to explore her life in much greater depth. The same real people and places connect all my books and I’ve worked hard to ensure they are as historically accurate as possible.

How do you flesh out your characters greatest sorrows?

There is a famous quote by Pulitzer prize winning poet Robert Lee Frost ‘No tears in the writer, no tears in the reader.’ I become so immersed in the lives of my characters that something like the loss of a child can be quite emotional. Mary Tudor was a princess and Queen of France, but she suffered greatly after the death of King Louis, so I had plenty to work with.

Was there a scene you found humorous to write about?

Mary was one of the guests of honour at the spectacular meeting between Henry VIII and King Francis I of France in June 1520, which became known as the Field of the Cloth of Gold. The two kings did their best to outdo each other in every possible way. Although it was a serious diplomatic meeting, there are stories about the two kings wresting each other to the ground, playing tricks and even seeing who could sing the loudest. Hall’s chronicle notes that ‘When dinner was over, some time was spent dancing in the banqueting hall. Before he started to dance, the French king went from one end of the room to the other, carrying his hat in his hand and kissing all the ladies on both sides – except for four or five who were too old and ugly’. 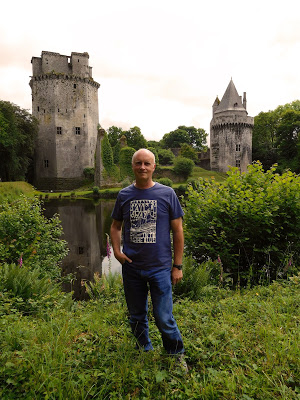 What are Mary’s attributes you find most intriguing to write about?

I wanted to explore Mary’s vulnerability as well as her strengths. I was intrigued by the complex relationship with her brother Henry VIII, and she had a strange dependence on Henry’s right hand man, Cardinal Thomas Wolsey. Wolsey was always doing her favours and lending her money. Of course, she knew he had ulterior motives, but she wept when she heard of his death.

What are some emotional triggers for Mary and how does she act on them?

There are many in this book, from the consequences of her decision to marry for love, to the trials of medieval childbirth. Although Mary shows exceptional courage and resilience, in the end they take their toll on her. Then she emerges from her sanctuary in Suffolk to challenge her brother’s decision to divorce her lifelong friend, Catherine of Aragon.

How is Henry influenced by his settings?

Henry used his father’s fortune to create his own settings and filled them with like-minded people. He was constantly on the move, in what was known as a ‘royal progress,’ and often took over a thousand people of his household with wagons carrying everything he might need. Even when he went to France he created a tented palace at huge expense. This could be seen as tremendous self-belief but in truth it veiled a deep insecurity.

How much research went into your story?

I’ve been researching the early Tudors for the last five years. When I began the trilogy I had little information about Owen Tudor, (Mary’s great-grandfather). The amount of information increased exponentially by the time I reached the story of Mary’s father, Henry Tudor, as he kept detailed legers of his finances. This time, I had the advantage of a fascinating book The French Queen’s Letters, by Erin Sadlack, which includes all Mary’s surviving letters, many with replies, as well as an insightful analysis of her state of mind at the time. I prefer primary research and found her letters offer an evocative ‘voice’ for Mary, as well as revealing how she felt about people and events.

When I was writing about Mary Tudor I researched the life of her second husband, Sir Charles Brandon, Duke of Suffolk, and visited his tomb at Windsor Castle. He was Henry VIII’s best friend and a champion jouster and adventurer, leading an army into France even though he had no military experience. Then he breaks his promise to Henry and secretly marries Mary. I’m now writing Brandon – Tudor Knight, which will tell the story from his point of view.

All my books are exclusive to Amazon and available worldwide in eBook and paperback. The Tudor Trilogy is also available as audiobooks and an audiobook edition of Mary – Tudor Princess is now in production. 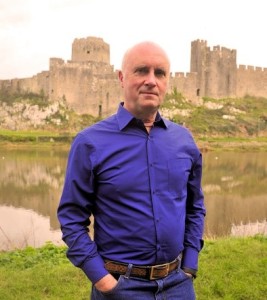 Tony Riches is a full-time author of best-selling historical fiction. He lives in Pembrokeshire, West Wales and is a specialist in the fifteenth century, with a particular interest in the Wars of the Roses and the lives of the early Tudors. For more information about Tony’s other books please visit his website tonyriches.com and his popular blog, The Writing Desk and find him on Facebook and Twitter @tonyriches.