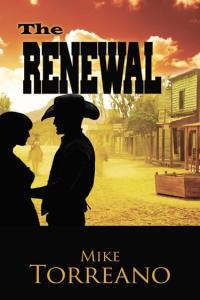 Ike McAlister has finally put the ghosts of his past to rest. He’s found new joy with a spirited wife, a young daughter, and a mountain valley ranch where a man can make something of himself. But a coming railroad through the South Park valley threatens to take his land and tear his hard-won peace apart.

Discovering that the railroad could easily bypass his ranch, he organizes opposition and earns the animus of the formidable foreman. When Ike’s brother Rob, the sheriff, is bushwhacked, Ike sets out on a high stakes quest to get the killer before the killer gets him.

Available on Amazon for Pre-Order.

Mike Torreano has a military background and is a student of history and the American West.

His western mystery, The Reckoning, was released September 2016 by The Wild Rose Press and the sequel, The Renewal, is due to be released soon. He’s working on the next western now and he also has a coming-of-age Civil War novel looking for a publisher.

Mike’s written for magazines and newspapers. An experienced editor, he’s taught University English and Journalism. He’s a member of the Historical Novel Society, Pikes Peak Writers, Rocky Mountain Fiction Writers, Western Writers of America and several other western writing groups. He brings his readers back in time with him as he recreates life in 19th century America.

Layered Pages interview with Mike will be posted here on march 5th! Don’t miss it!