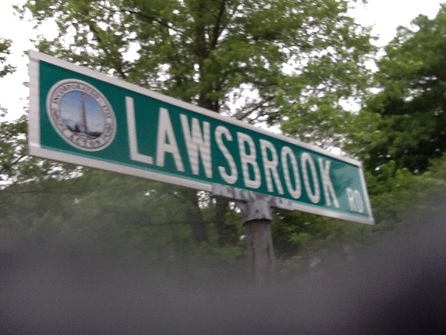 Alfred Woollacott has written a story about his ancestor John Law in The Immigrant and I am across a blog post on his website about Alfred’s drive down Lawsbrook Rd and thought how extraordinary it would be to travel down the same road your ancestors lived. Can you image all the feelings building inside you and the anticipation of what you might discover further? Below is the first paragraph in Alfred’s post and I want to encourage you to follow the link I provide to read the rest of his fascinating post. -Stephanie M. Hopkins

A Jaguar sedan sped along Route 2 with a map of old Acton laying on the passenger seat for reference. The driver was researching the past of John Law, his distant ancestor, trying to pinpoint where he settled some 350 years earlier. This direct descendant had spent his youth twenty miles west of Acton and frequently traveled Route 2 into Boston. The Concord rotary was an approximate midpoint between Boston and his home. The road used to change noticeably at the rotary. To the west, there were rural towns and a divided highway, and to the east, suburbs and an undivided highway, littered with stoplights and congestion.  The farmland just west of the rotary had changed little since he first saw it in his youth. No matter how often he passed by the farmland, he always had peculiar sensations. Often those sensations reminded him to adjust his speed. If he travelling east, slow down and endure the congestion, and if travelling west, open it up and look out for cops…Read more HERE

A historical saga that covers a winter of 1650/1651 journey of John Law, a young Scotsman captured by the English Lord Cromwell’s forces in seventeenth century Scotland during “The Battle of Dunbar”. He survives a death march to Durham, England and is eventually sent to Massachusetts Bay Colony as an indentured servant, arriving aboard the ship “Unity” that was carrying around 150 prisoners of war from different Scottish clans. Now an outcast, and in the sanctuary of the new colony, John starts over as an immigrant in a Puritan theocracy. He is first indentured to the Saugus Iron Works and then to Concord as a public shepherd in West Concord (now Acton). The young man faces obstacles often beyond his control, and his only ally is his faith. After his indenture is served he struggles a near lifetime to obtain title to his promised land. From start to finish “The Immigrant” is an intoxicating journey that follows the travails of John, his faith in God, his good wife and growing family.