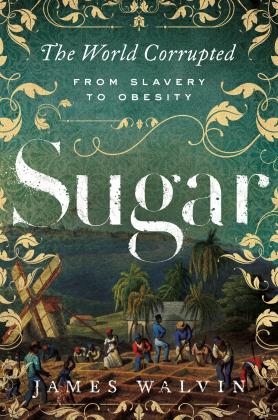 The World Corrupted: From Slavery to Obesity James Walvin

The modern successor to Sweetness and Power, James Walvin’s Sugar is a rich and engaging work on a topic that continues to change our world.

How did a simple commodity, once the prized monopoly of kings and princes, become an essential ingredient in the lives of millions, before mutating yet again into the cause of a global health epidemic? Prior to 1600, sugar was a costly luxury, the domain of the rich. But with the rise of the sugar colonies in the New World over the following century, sugar became cheap, ubiquitous and an everyday necessity. Less than fifty years ago, few people suggested that sugar posed a global health problem.  And yet today, sugar is regularly denounced as a dangerous addiction, on a par with tobacco. While sugar consumption remains higher than ever—in some countries as high as 100lbs per head per year—some advertisements even proudly proclaim that their product contains no sugar. How did sugar grow from prize to pariah? Acclaimed historian James Walvin looks at the history of our collective sweet tooth, beginning with the sugar grown by enslaved people who had been uprooted and shipped vast distances to undertake the grueling labor on plantations.  The combination of sugar and slavery would transform the tastes of the Western world. Masterfully insightful and probing, James Walvin reveals the relationship between society and sweetness over the past two centuries—and how it explains our conflicted relationship with sugar today.

James Walvin is the author of several books on slavery and modern social history. including Crossings and A Jamaican Plantation. He is a Fellow of the Royal Society of Literature and in 2008 he was awarded an OBE for services to scholarship. He lives in England.

I rate the cover five stars now if I can get my hands on a copy of this book! Everything about the premise interest me! -Stephanie M. Hopkins