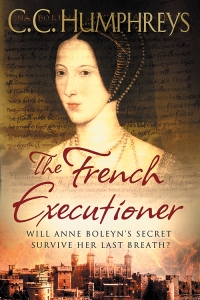 About the Book: The year is 1536, and notorious French executioner Jean Rombaud is brought in by Henry VIII to behead Anne Boleyn, the condemned Queen of England. But on the eve of her execution, Rombaud becomes enchanted with the ill-fated queen and swears a vow to her: to bury her six-fingered hand, a symbol of her rumored witchery, at a sacred crossroads.

Yet in a Europe ravaged by religious war, the hand of this infamous Protestant icon is so powerful a relic that many will kill for it. Bloodthirsty warriors, corrupt church fathers, Vikings, alchemists, and sullied noblemen alike vie for the prize as Rombaud, a man loyal to the grave, struggles to honor his promise.

From sea battles to lusty liaisons, from the hallucinations of St. Anthony’s fire to the fortress of an apocalyptic messiah, The French Executioner sweeps readers into a breathtaking story of courage, the pursuit of power, and loyalty at whatever cost.

What was the most surprising thing you discovered in your research for the novel?

This is a good question.

The French Executioner was my very first novel. Thus I had no real idea how to write one and assumed that one needed to know absolutely everything about a book before you began to write it. (I have since discovered that such obsessive research can be a form of procrastination and now only read for about three months, trusting that the novel and especially the characters will teach me what I need to study as I go along!) Also, I didn’t believe that I would ever truly summon the will (and courage) to actually start. So I spent a lot of time in second hand bookstores scanning shelves, thinking: If I ever do write that book about Anne Boleyn’s Executioner – which I probably never will – but if I do I will put everything into it I want to write about! Ooh, look at this book about slave galleys. I’d want a battle with them. Ooh, here’s one on the Black Mass. That’s definitely in!

So, in the six ears between having the idea for the novel (Anne Boleyn begs her executioner to take her six fingered hand when he takes her head and get rid of it. What happened next) and beginning to write it, I acquired a large library of books I read on various subjects.

The most surprising thing? It was a book about St. Antony’s Fire. This was the mass hallucination that would take villages when the villagers ate bread made from rye, that had been infected by the grain disease ergot – later to be synthesized into LSD. The poor people would eat the bread, and anyone who did would start having terrible contractions and massive hallucinations a few hours later. They would not know what it really was so assumed the Devil had come to take them to his fires. There are reports from all over Europe but the disease began to disappear with better crop techniques in the 18th century. However there was one outbreak in 1952 in a village in France. I bought that book, read it, shuddered – a lot of people died – then used it in my novel, as some of my characters get caught up in the Fire.

Horrible – but very colorful. My main villain is the Archbishop of Siena – a corrupt, decadent, highly educated killer. His hallucinations – full of Biblical and Satanic figures – were especially interesting to write!

C.C. Humphreys is the author of eight historical novels. The French Executioner, which was his first novel and a runner-up for the CWA Steel Dagger for Thrillers award in 2002, has never before been published in the U.S. The sequel, The Curse of Anne Boleyn, will be published in the U.S. in May 2015.

Humphreys has acted all over the world and appeared on stages ranging from London’s West End to Hollywood’s Twentieth Century Fox. He is also an accomplished swordsman and fight choreographer. For more information, visit http://cchumphreys.com/

Praise for The French Executioner

“Set against the backdrop of the Protestant Reformation, his superbloody Princess Bride-like adventure is, at its heart, a tale of redemption, well-earned and hard-won.” – Library Journal

“This unusual tale conjures visions of an Errol Flynn-type Hollywood swashbuckler…the tale’s well-told, engagingly written, and includes a colorful immersion into a time when life was cheap and danger or death literally waited around every corner. A gory but fascinating…look at the world in the early 16th century.” -Kirkus