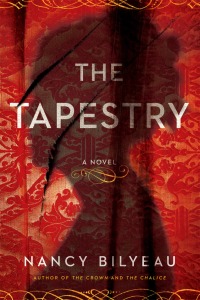 In THE CROWN, Sister Joanna Stafford searched for a Dark Ages relic that could save her priory from Cromwell’s advancing army of destruction. In THE CHALICE, Joanna was drawn into an international conspiracy against Henry VIII himself as she struggled to learn the truth behind a prophecy of his destruction.

Now, in THE TAPESTRY, Joanna Stafford finally chooses her own destiny.

After her Dominican priory in Dartford closed forever—collateral damage in tyrannical King Henry VIII’s quest to overthrow the Catholic Church—Joanna resolves to live a quiet and honorable life weaving tapestries, shunning dangerous quests and conspiracies. Until she is summoned to Whitehall Palace, where her tapestry weaving has drawn the King’s attention.

Joanna is uncomfortable serving the King, and fears for her life in a court bursting with hidden agendas and a casual disregard for the virtues she holds dear. Her suspicions are confirmed when an assassin attempts to kill her moments after arriving at Whitehall.

Struggling to stay ahead of her most formidable enemy yet, an unknown one, she becomes entangled in dangerous court politics. Her dear friend Catherine Howard is rumored to be the King’s mistress. Joanna is determined to protect young, beautiful, naïve Catherine from becoming the King’s next wife and, possibly, victim.

Set in a world of royal banquets and feasts, tournament jousts, ship voyages, and Tower Hill executions, this thrilling tale finds Joanna in her most dangerous situation yet, as she attempts to decide the life she wants to live: nun or wife, spy or subject, rebel or courtier. Joanna Stafford must finally choose.

In this third book of what is one of my all-time favorite series, Joanna Stafford is summoned to Henry VIII’s court. She’d rather stay in Dartford with her loom to weave tapestries and be with her friends. She has had quite enough of the dangers out there. However, Joanna tapestry making has caught the attention of King Henry VIII. She knows she must go and fears for her life because of her involvement in tempting to over thrown the King. Not only that, she has made a few enemies along the way…Almost the moment she gets there her life is in danger and then starts the peril and yet-exciting- journey to find out who this time is trying to take her life….what do I mean by exciting? Just that. This story was a page turner from the start until the very end. I did not want the story to end. I wanted more. Joanna is the perfect heroine and she leads such a thrilling life. She is intelligent, courageous, a woman of unfailing faith and just an all-around true lady.

There are a few things that really stood out to me. The momentum of the narrative (thrilling), how Joanna is describing Henry’s court and how she notices details around her. For example, how she describes the chamber where the King receives ambassadors or presides over certain court functions. She gives you such a clear picture. I felt I was there standing next to her taking it all in. There are so many examples like that in the story and they are all fascinating. What I have imagined the life of the Tudor court to be is just how Bilyeau describes it.

Another thing about this story is that there is many notable historical figures…several really stood out to me. Hans Holbein-the court painter-is someone who I am highly interested in and I think that has a lot to do with my profound interest in the arts. I admire Bilyeau portrayal of him in the story. He is a famous painter who is from Augsburg, Germany. A few of the portraits he painted were of Thomas More, Anne Boleyn, Thomas Cromwell and Henry VIII-to name a few. In this story there was one person’s portrait he painted that I would like to find out from Bilyeau if he actually did….if historically he didn’t, it certainly was a great addition to the story-line.

Catherine Howard is another one that stood out to me. My heart went out to her and I wanted there to be another outcome of her fate so bad in this story but we all know the history of what happen to her and Bilyeau portrays that splendidly. I was also impressed with the themes of the Reformation, Martin Luther and some of the occult dealings in the story and Henry VIII personality and behavior. Well researched and brilliantly written.

Since having read this book there are a few other history events that was included I look forward to exploring more. I want there to be another story about Joanna Stafford from Bilyeau. That is my wish. When finished reading, The Tapestry, I already missed her…sigh. What a fantastic story.

Nancy Bilyeau has worked on the staffs of InStyle, Rolling Stone, Entertainment Weekly, and Ladies Home Journal. She is currently the executive editor of DuJour magazine. Her screenplays have placed in several prominent industry competitions. Two scripts reached the semi-finalist round of the Nicholl Fellowships of the Academy of Motion Pictures Arts and Sciences. Her screenplay “Zenobia” placed with the American Zoetrope competition, and “Loving Marys” reached the finalist stage of Scriptapalooza. A native of the Midwest, she earned a bachelor’s degree from the University of Michigan. THE CROWN, her first novel, was published in 2012; the sequel, THE CHALICE, followed in 2013. THE TAPESTRY will be released in March 2015.

Nancy lives in New York City with her husband and two children. Stay in touch with her on Twitter at @tudorscribe. For more information or to sign up for Nancy’s Newsletter please visit her official website.

Monday, March 16 Review at Peeking Between the Pages Review & Interview at Words and Peace

Tuesday, March 17 Review at A Bookish Affair Review at The Eclectic Reader Review at Let Them Read Books

Wednesday, March 18 Review at Writing the Renaissance Review at Oh, For the Hook of a Book

Thursday, March 19 Review at A Book Geek Review & Interview at Tea at Trianon Interview at Writing the Renaissance

Wednesday, March 25 Review at Luxury Reading Guest Post at Oh, For the Hook of a Book

Wednesday, April 1 Review at Library of Clean Reads Interview at Oh, For the Hook of a Book