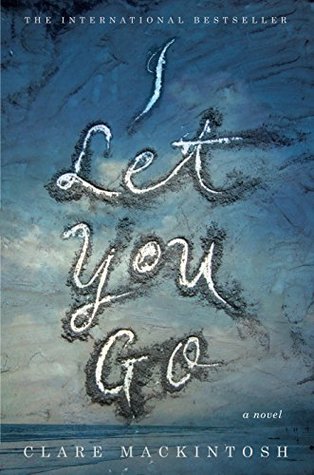 I Let You Go by  Clare Mackintosh

On a rainy afternoon, a mother’s life is shattered as her son slips from her grip and runs into the street . . .

I Let You Go follows Jenna Gray as she moves to a ramshackle cottage on the remote Welsh coast, trying to escape the memory of the car accident that plays again and again in her mind and desperate to heal from the loss of her child and the rest of her painful past.

At the same time, the novel tracks the pair of Bristol police investigators trying to get to the bottom of this hit-and-run. As they chase down one hopeless lead after another, they find themselves as drawn to each other as they are to the frustrating, twist-filled case before them. Elizabeth Haynes, author of Into the Darkest Corner, says, “I read I Let You Go in two sittings; it made me cry (at least twice), made me gasp out loud (once), and above all made me wish I’d written it . . . a stellar achievement.”

This story has so many twist and turns in the plot it’s hard to know where to begin. However, I think I will start with the character development. I have to say that I found Jenna Gray’s character to be better written in the story than the two Bristol Police Investigators.  The personal intersection between the two fell flat. I felt absolutely no chemistry between them and I felt it did not add to the story. I was disappointed in that.

Also, Ray one of the investigators, has a troubled son and I was wondering where the author was going with that in the story. It could have been a good back ground story if it played in the main plot some but it didn’t. So I felt that could have been left out.

Jenna Gray is a complex character that a reader can sympathize with. She has faced many hardships-to put it lightly and as you read through the story, it unfolds what those hardships are. Truly suspenseful and gripping.

As for a psychological thriller, this makes a truly good one and for that I am wanting to read more stories by the author.

I have rated this book three stars.

I received a copy of this book from NetGalley for an honest review.

Side note: I had the pleasure of buddy reading this book with a fellow book blogger and we had great fun with it. It was also refreshing to see that we were eye to eye about a lot of aspects of the story.

2 thoughts on “Review: I Let You Go by Clare MacKintosh”