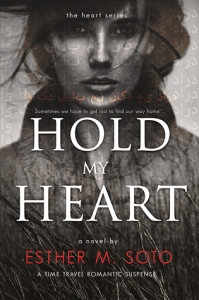 On a manhunt for a serial killer, FBI Special Agent Ileana Harper falls through a break in time, ripping her from the present and everything she knows. After forming an uneasy alliance with the man who comes to her rescue, she unearths long-buried family secrets. Spiraling out of control, she clings to memories of Tommy, her partner and best friend of eight years, to keep her sane, fearful she may never see him again.

FBI Special Agent Tommy Colton relies on Ileana to keep him grounded; she’s the closest thing he’s ever had to love in his life. When Ileana disappears, leaving no trace, he falls apart. Without her beside him, Tommy is about to face the biggest challenge of his career, if not his life.

While trying to find a way home, Ileana races to determine the killer’s identity and discovers he might be closer than she realized.

Will she risk everything to catch him, or sacrifice justice to find her way back to Tommy before it’s too late?

Hold My Heart is the second book I have read this year where a female FBI Agent is pulled through time from the present. These stories really interest me and I liked how this one played out. There was even a bit of humor in the story-line. I have to admit I liked the characters that lived in the past much better than the ones in the present. Though I do like Ileana very much, I wasn’t thrilled about Tommy-at first and I am not sure I have quite warmed up to him yet. To me he came across like an over-protective, jealous and insecure boyfriend. The guy definitely has issues and you will learn more about that in the story. Having said that these two have a connection and it shows throughout the book.

Esther M. Soto does a marvelous job depicting the past and you feel as if you were taken back to the past with Ileana. Truly atmospheric and absorbing. I have to admit, I wanted Ileana to stay in the past. She meets wonderful people and I believe she learns a lot about herself. So many intense parts in this story and it was thrilling to read about Ileana racing to find the identity of the killer.

I would like to caution readers who are sensitive to profanity. There is a lot in the story and the “f” bomb was dropped a lot. I really could have done without that. For me it was too much and it would have been even better if there wasn’t any use of that word in the story.

Having said that, I can’t talk enough about how I can’t wait to read the next book in this series.

I have rated this book four and a half stars.

I obtained a copy of this book through NetGalley for an honest review.

3 thoughts on “Review: Hold My Heart by Esther M. Soto”