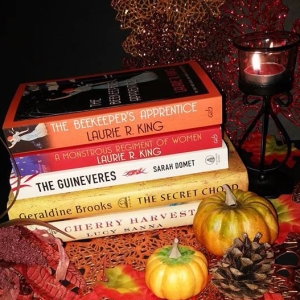 As a book reviewer it is not often I have time to read books from my personal library. I have made it a goal to read at least five books from my shelf by the end of November. I really hope I met that goal seeing as I have others to get through for review.

I had a lot of fun putting this collection of books together and creating a fall theme presentation for them. I am rather pleased with how it turned out and I feel it gives me a better sense of anticipation to read the books. I look forward to journaling about them soon. Once I get the journal going I will be sure to share with you of how it is coming together. 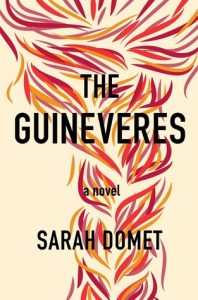 The Guineveres by Sarah Domet

To four girls who have nothing, their friendship is everything: they are each other’s confidants, teachers, and family. The girls are all named Guinevere – Vere, Gwen, Ginny, and Win – and it is the surprise of finding another Guinevere in their midst that first brings them together.

They come to The Sisters of the Supreme Adoration convent by different paths, delivered by their families, each with her own complicated, heartbreaking story that she safeguards. Gwen is all Hollywood glamour and swagger; Ginny is a budding artiste with a sentiment to match; Win’s tough bravado isn’t even skin deep; and Vere is the only one who seems to be a believer, trying to hold onto her faith that her mother will one day return for her. However, the girls are more than the sum of their parts and together they form the all-powerful and confident The Guineveres, bound by the extraordinary coincidence of their names and girded against the indignities of their plain, sequestered lives.

The nuns who raise them teach the Guineveres that faith is about waiting: waiting for the mail, for weekly wash day, for a miracle, or for the day they turn eighteen and are allowed to leave the convent. But the Guineveres grow tired of waiting. And so, when four comatose soldiers from the War looming outside arrive at the convent, the girls realize that these men may hold their ticket out.

In prose shot through with beauty, Sarah Domet weaves together the Guineveres’ past, present, and future, as well as the stories of the female saints they were raised on, to capture the wonder and tumult of girlhood and the magical thinking of young women as they cross over to adulthood. 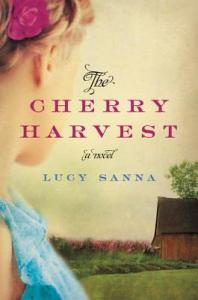 The Cherry Harvest by Lucy Sanna

A memorable coming-of-age story and love story, laced with suspense, which explores a hidden side of the home front during World War II, when German POWs were put to work in a Wisconsin farm community . . . with dark and unexpected consequences

The war has taken a toll on the Christiansen family. With food rationed and money scarce, Charlotte struggles to keep her family well fed. Her teenage daughter, Kate, raises rabbits to earn money for college and dreams of becoming a writer. Her husband, Thomas, struggles to keep the farm going while their son, and most of the other local men, are fighting in Europe.

When their upcoming cherry harvest is threatened, strong-willed Charlotte helps persuade local authorities to allow German war prisoners from a nearby camp to pick the fruit.

But when Thomas befriends one of the prisoners, a teacher named Karl, and invites him to tutor Kate, the implications of Charlotte’s decision become apparent—especially when she finds herself unexpectedly drawn to Karl. So busy are they with the prisoners that Charlotte and Thomas fail to see that Kate is becoming a young woman, with dreams and temptations of her own—including a secret romance with the son of a wealthy, war-profiteering senator. And when their beloved Ben returns home, bitter and injured, bearing an intense hatred of Germans, Charlotte’s secrets threaten to explode their world.

The Secret Chord by Geraldine Brooks

Peeling away the myth to bring the Old Testament’s King David to life in Second Iron Age Israel, Brooks traces the arc of his journey from obscurity to fame, from shepherd to soldier, from hero to traitor, from beloved king to murderous despot and into his remorseful and diminished dotage.

The Secret Chord provides new context for some of the best-known episodes of David’s life while also focusing on others, even more remarkable and emotionally intense, that have been neglected.  We see David through the eyes of those who love him or fear him—from the prophet Natan, voice of his conscience, to his wives Mikhal, Avigail, and Batsheva, and finally to Solomon, the late-born son who redeems his Lear-like old age. Brooks has an uncanny ability to hear and transform characters from history, and this beautifully written, unvarnished saga of faith, desire, family, ambition, betrayal, and power will enthrall her many fans.

Long retired, Sherlock Holmes quietly pursues his study of honeybee behavior on the Sussex Downs. He never imagines he would encounter anyone whose intellect matched his own, much less an audacious teenage girl with a penchant for detection. Miss Mary Russell becomes Holmes’ pupil and quickly hones her talent for deduction, disguises and danger. But when an elusive villain enters the picture, their partnership is put to a real test. 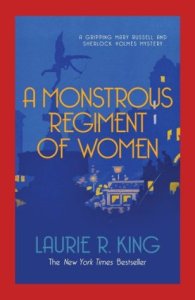 Looking for respite in London after a stupefying visit from relatives, Mary encounters a friend from Oxford. The young woman introduces Mary to her current enthusiasm, a strange and enigmatic woman named Margery Childe, who leads something called “The New Temple of God.” It seems to be a charismatic sect involved in the post-World War I suffrage movement, with a feminist slant on Christianity. Mary is curious about the woman, and intrigued. Is the New Temple a front for something more sinister? When a series of murders claims members of the movement’s wealthy young female volunteers and principal contributors, Mary, with Holmes in the background, begins to investigate. Things become more desperate than either of them expected as Mary’s search plunges her into the worst danger she has faced yet. 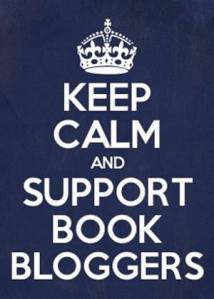 3 thoughts on “Fall Reads: Paperbacks On My Shelf”