I’d like to welcome Alfred Woollacott, III to Layered Pages today. Alfred retired from KPMG after a career spanning 34 years, choosing to reside full time at his summer residence on Martha’s Vineyard. Being “45 minutes from America” and with a 50 – 60 hour per week void to fill, he began dabbling into his family history. His dabbling grew into an obsession, and he published several genealogical summaries of his ancestors. But certain ones absorbed him such that he could not leave them. So, he researched their lives and times further while evolving his writing skills from “just the facts ma’am” to a fascinating narrative style. Thus, with imagination, anchored in fact and tempered with plausibility, a remote ancestor can achieve a robust life as envisioned by a writer with a few drops of his ancestor’s blood in his veins.

When not writing, Al serves on several Boards, and keeps physically active with golf, tennis, and hockey. He and his wife of 44 years, Jill, have four children and ten grandchildren.

Thank you for talking with me today, Alfred. Please tell you how you got into story-telling?

My blessing to spin a good story comes from my namesake, Alfred Sr., sprinkled, at times, with humor — genes from my maternal grandmother, Gracie. Beneath an extemporaneous exterior, lies a logical, results-oriented mind that spent a career at KPMG, an international accounting firm, researching facts and forming conclusions. So when I retired, dabbling in genealogical facts came naturally, and I got hooked. For a few on my ancestral tree, the facts cried out, “There’s a story here, add more leaves to the branches.” So I allowed the extemporaneous to spin a yarn around the facts and brought an ancestor to life

Tell me about your book, The Immigrant.

The Immigrant is a fictionalized account of my seven-greats grandfather, John Law, who came to The Colonies in chains, a Scottish prisoner of war captured during the Battle of Dunbar. Upon his arrival in the winter of 1651, he began his indenture at the Saugus Iron Works and concluded it as a public shepherd for the town of Concord. Freed from his indenture, he began life anew to endure a Puritan Theocracy, English bigotry, and Native American dangers. Throughout all his ordeals, he wondered if God ever heard him. One day, he did.

Tell me about your book, The Believers in The Crucible Nauvoo. 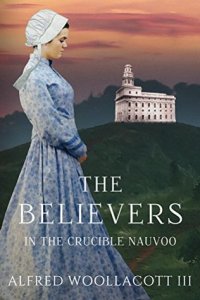 The book is the second of a planned trilogy, whose protagonist, Naamah Carter, like me descends from John Law. After enduring early parental deaths, she discovers renewed meaning to her strong Christian beliefs through Joseph Smith’s testaments. His following in Peterborough, New Hampshire flourishes, yet Naamah, her beloved Aunt Susan, and other believers suffer family strife and growing community resentment. She leaves her unfriendly situation and journeys to Nauvoo to be among thousands building their Prophet‘s revelation of an earthly Zion on a Mississippi River promontory. There, her faith is tested, enduring loss of loved ones and violence from those longing to destroy Nauvoo. With the western exodus imminent, she faces a decision that runs counter to her soul and all she holds sacred – whether to become Brigham Young’s plural wife.

The novel weaves the momentous events of Joseph Smith’s martyrdom and Brigham Young’s succession with Naamah’s story and offers differing perspectives to create a mosaic of Nauvoo, the crucible out of which arose today’s Church of Jesus Christ of the Latter-day Saints.

In your story, The Immigrant, you introduce an historical figure John Law, a young Scotsman captured by Cromwell’s forces during a well-known battle “The Battle of Dunbar.” For those who have not heard of John Law, can you please tell us a little about him historically and what his faith is?

Yes, John law is a historic figure, yet deemed too insignificant for the historian’s lens. The Immigrant has brought him to life and, since he’s symbolic of 10,000 Scottish men at Dunbar 3 September 1650, their lives have been discovered in some way.  His father died in 1649 when John was thirteen. An only child, he and his widowed mother managed for a year until the War Councilor appeared in summer of 1650. “He’ll be back in time for harvest,” was the Councilor’s remark as John left. John would never see his mother again, and she would never know John’s fate.After John’s capture, he endured a ‘death march’ into northern England, a horrific six week incarceration at Durham Cathedral, and a life-changing, Trans-Atlantic crossing to the Colonies. The Massachusetts Bay Colony was established with a wave of English, the great Migration 1630-1640. Except for the indigenous, they owned a virgin paradise to craft to their liking until John Law and a few Scots trickled in as immigrants. Since then, waves of immigrants have come, even still today. Each new wave has encountered prejudice, but far less blatant or extreme than what John endured. In 1660, Mary Dyer and William Leddra were hanged on Boston Common because they were Quakers. We all are aware of Salem and 1692 witch trials.

Since John was fighting with The Covenanters against Cromwell, he was most likely a Presbyterian.

How much research went into The Immigrant?

I am a CPA turn genealogist, so a lot! Some of John Law’s genealogy down to myself has been published in two-parts in MASSOG, a genealogy-register — 16 pages with over 200 footnote. Dry as dust, yet available on my website if you’re interested. John is presumed to be a Scottish POW, which I attempted to prove through research on early Scots at NEHGS, reading books on the Saugus Iron Works, reading 1600s Middlesex County court reports including John’s will, and perusing passenger lists of the Unity and the John and Sara ships that brought Scottish POW to The Colonies. And while I know of his life from 1655 on, I can neither prove nor disprove how he got here.

I visited the Saugus Ironworks, learned how iron was made, and romanticized while at the intersection of Lawsbrook Road and School Street in Acton, MA, where John lived.  The influence of my Lawsbrook visit are the concluding scene in The Immigrant.

Who are your secondary characters in your story?

Obviously, Lydia Draper, John’s wife. During my research, I found more snippets about the Drapers than I did about John Law to wrap a story around. Lydia’s POV occurs often, particularly during the birth of their first born, later with the loss of an infant son, and during King Philip’s War. Mary Rowlandson’s capture and release had a profound effect on Lydia.

Nagoglancit, a Nashobah Native, is complete fiction. Like John, he is an outcast, and ironically unlike John, an outcast in his native land. But these two ‘outcast’ form a unique bond, tested, at times, when Lydia reveals a past encounter with natives and during King Philip’s War.

John Hoare – during my research I came to love this guy, so he is throughout the book. He counsels John to do the right thing and make an honest woman of Lydia Draper, rescues Mary Rowlandson, and builds a dormitory for the ‘friendly’ Nashobah during King Philip’s War much to Concord’s dismay.

How long did it take to write your story?

In your story, The Believers in The Crucible Nauvoo you introduce Naamah Carter. What a beautiful name! Could you please tell us a little about her?

Naamah, wife of Noah, meaning pleasant because Naamah’s conduct was pleasing to God. Naamah Kendall Jenkins Carter was named for her aunt who died three weeks before she was born, which created an immediate bond and early interest in the afterlife.

We first meet Naamah, age 6, placing flowers on her father’s grave. There, she asks her grandfather, Reuben Law, a question, the answer to which comes years later as Naamah grapples with a life-changing decision. Precocious in her Christian beliefs, she soon found traditional teaching uninspiring until she meets Elder Eli Maginn, a Latter-day Saint missionary. The strength of her faith continues to ebb and flow as she endures life until she finds lasting solace in Temple life.

Her life is mostly among women – her mother who dies early, her sister, and her LDS sisters. Like all the women of Nauvoo, she has the resiliency needed to endure the pain and suffering that was the crucible Nauvoo. While inexperienced in dealing with men, she marries only to have her husband die soon afterward. Thus, when she meets the powerful ‘lion of the Lord’, Brigham Young, she’s at first ill-prepared, yet perseveres to forge a unique relationship.

Where can readers buy your books?

At Amazon, or discerning book stores like Bunch of Grapes, Vineyard Haven, MA, or on my website.

What is up next for you?

Reuben Law and the trilogy’s last book. You have met Reuben in the first and last chapters of The Immigrant. He’s on Jarmany Hill in the opening scene of The Believers In The Crucible Nauvoo and sprinkled throughout. He’s the lynchpin between the two novels. For more about Reuben, visit my website. I sensed John Law’s presence when I paused on Lawsbrook Road, but I sensed Reuben even more. Here is a link to what I experienced in September 2009.

Is there a message you would like to give to your readers?

Historical novelists research and pour their heart and soul into their writings, as do I. But my heart has a few drops of their blood and my soul has part of their DNA. My characters bore witness to King Philip’s War, The American Revolution, and Joseph Smith’s Martyrdom and encountered prejudice for being a Scottish POW in a Puritan Theocracy or a believer in a scorned prophet. I trust that the tingles I experienced at Lawsbrook Road or on Jarmany Hill came from erstwhile dormant DNA exploding thoughts that coalesced to say, “There’s a story here.”

What is L.A.P. it Marketing?

L.A.P. it is a social media platform that applies to a variety of professions-such as-Literature, Art and Photography. The practicalities of Internet life can be tricky for many, not everyone is computer savvy and would prefer to solely focus on their craft or they have a tight budget but need help in this arena. How does one market their own work if they have little money or they don’t understand how the market works or both? There are so many entities out there charging fees that are not doable for most or they promise what they cannot deliver. L.A.P. it has created a new concept of social media marketing and provides a unique service to showcase writers, artists and photographers work. L.A.P. it will also work with publishers, independent presses, artist/photographer galleries and other entities that involve the three areas mentioned.