Back in November of 2017 I posted about a book event I went to, and southern authors and their stories were featured. This gave me an idea to start a series on southern writers and how important their stories are and what makes them unique. Today I am featuring a unique southern story One Good Mama Bone by Bren McClain. 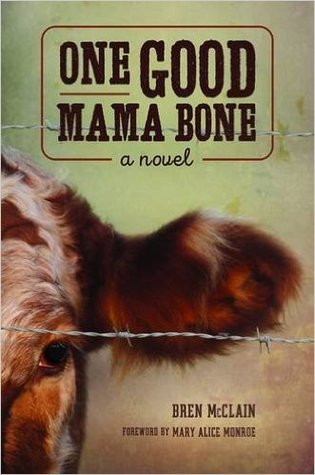 Set in early 1950s rural South Carolina, One Good Mama Bone chronicles Sarah Creamer’s quest to find her “mama bone,” after she is left to care for a boy who is not her own but instead is the product of an affair between her husband and her best friend and neighbor, a woman she calls “Sister.” When her husband drinks himself to death, Sarah, a dirt-poor homemaker with no family to rely on and the note on the farm long past due, must find a way for her and young Emerson Bridge to survive. But the more daunting obstacle is Sarah’s fear that her mother’s words, seared in her memory since she first heard them at the age of six, were a prophesy, “You ain’t got you one good mama bone in you, girl.”

When Sarah reads in the local newspaper that a boy won $680 with his Grand Champion steer at the recent 1951 Fat Cattle Show & Sale, she sees this as their financial salvation and finds a way to get Emerson Bridge a steer from a local farmer to compete in the 1952 show. But the young calf is unsettled at Sarah’s farm, crying out in distress and growing louder as the night wears on. Some four miles away, the steer’s mother hears his cries and breaks out of a barbed-wire fence to go in search of him. The next morning Sarah finds the young steer quiet, content, and nursing a large cow. Inspired by the mother cow’s act of love, Sarah names her Mama Red. And so Sarah’s education in motherhood begins with Mama Red as her teacher.

But Luther Dobbins, the man who sold Sarah the steer, has his sights set on winning too, and, like Sarah, he is desperate, but not for money. Dobbins is desperate for glory, wanting to regain his lost grand-champion dynasty, and he will stop at nothing to win. Emboldened by her lessons from Mama Red and her budding mama bone, Sarah is committed to victory even after she learns the winning steer’s ultimate fate. Will she stop at nothing, even if it means betraying her teacher?

McClain’s writing is distinguished by a sophisticated and detailed portrayal of the day-to-day realities of rural poverty and an authentic sense of time and place that marks the best southern fiction. Her characters transcend their archetypes and her animal-as-teacher theme recalls the likes of Water for Elephants and The Art of Racing in the Rain. One Good Mama Bone explores the strengths and limitations of parental love, the healing power of the human-animal bond, and the ethical dilemmas of raising animals for food.

Recording by Bren of One Good Mama Bone, first chapter 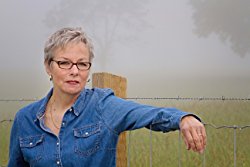 Bren McClain’s literary novel, ONE GOOD MAMA BONE, debuted in February with Pat Conroy’s original fiction imprint, Story River Books. The novel has been named a Great Group Reads 2017 Selection by the Women’s National Book Association, named the top pick for 2017 by Lit Picks, long-listed for the 2018 Crook’s Corner Book Prize, received a starred review in “Booklist,” named a 2017 winter Okra pick by the Southeastern Independent Booksellers Alliance and made a Pulpwood Queens worldwide book club selection. Bren is at work on her next novel, TOOK, which received the gold medal for the 2016 William Faulkner –William Wisdom Novel-in-Progress. Bren was born and raised in Anderson, South Carolina, on a beef cattle and grain farm and now makes her home on 100 acres outside of Nashville, Tennessee. Find her online at her  Website .

5 thoughts on “A glance at a Southern Story: One Good Mama Bone by Bren McClain”