TODAY’S THE DAY…The Book Launch Party is now in full swing for The Twelfth Child by Bette Lee Crosby – stop by my blog and learn how to join in the fun. Lots of prizes and giveaways – including a $25. Amazon Gift card. Check it out http://wp.me/pNOkn-r7

When I review a book I look for a number of things. Character, plot, style and editing. Is the character interesting, do they fulfill their purpose and are they believable. Is the story creative and interesting. How does the story flow and does the story end properly. I look at the mechanics of writing as well. The dialogue, description and if the story is true to its time and place. I look at the overall professional layout and the cover design. I think this is what makes for a good reviewer, professional one or not.

Interview with Michele Kallio-June 4th
When you read a story this good, you always wonder if the next book will compare.

Lydia a modern day women who lives in Canada with her boyfriend begins to experience dreams after her father’s death. Dreams of another time, place, and about a women whom she soon discovers her name, Elisabeth Beeton, a servant of Anne Boleyn during the time of King Henry VIII in sixteenth century England.

Lydia desperately wants to know why she is having these dreams and what they mean. Meanwhile her mother’s (who passed away) family who lives in England has been searching for her and makes contact. After receiving her mother’s journal from her aunt and uncle in England, Lydia comes to realize this might be the key to solve why she is having these dreams. While her relationship with her boyfriend hangs in the balance she goes to England to solve this mystery and to unite with her mother’s family.

The premise for this story is fascinating and the transition between present-day and the sixteenth century is masterfully done. The character building is excellent and the story leading up to Anne Boleyn execution is so believable, one might actually think these events could have happen this way. I highly recommend this novel to all who loves historical fiction with a contemporary flare. 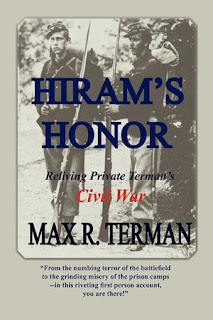 This deeply moving story describes Union soldier Hiram Terman’s experiences during the American Civil War. Hiram joins the 82nd Ohio Regiment in 1862, where he meets two men, Seth and Isaiah, and they become fast friends. As they leave for the first march, they are excited but apprehensive about what lies ahead.

Hiram, Seth, and Isaiah face many challenges as they march from battle to battle and camp to camp. At the battle of Gettysburg, Hiram, his friends, and hundreds of soldiers are taken prisoner by the Confederates and sent to Belle Island. Death is a real possibility in the prison, so they quickly learn how to survive under the most vile conditions. Hiram is eventually transferred to Andersonville and other camps as well.

The misery of the prison camps is heart-breaking and many of the men perish. This story highlights one soldier’s admirable strength, courage, and perseverance to withstand the horrors of war, and the author does a wonderful job of describing this. The book is well-written and the character building is excellent. Max Terman offers the reader a realistic and detailed account of the battles and what camp life was like for the soldiers. I felt as if I were there witnessing first-hand what they were going through. I was also pleasantly surprised to discover the author is a descendant of Hiram, which made the story all the more interesting to read. I highly recommend this book to readers who are interested in this period of time in U.S. history.

You also may see my review on HNS: http://historicalnovelsociety.org/reviews/hirams-honor/