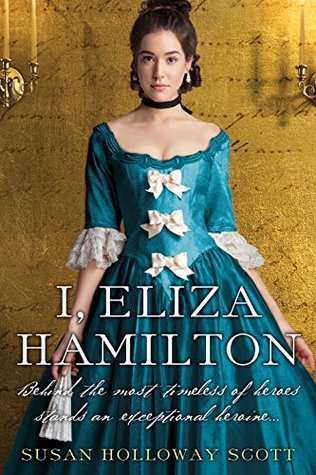 “Love is not easy with a man chosen by Fate for greatness . . .”

As the daughter of a respected general, Elizabeth Schuyler is accustomed to socializing with dignitaries and soldiers. But no visitor to her parents’ home has affected her so strongly as Alexander Hamilton, a charismatic, ambitious aide to George Washington. They marry quickly, and despite the tumult of the American Revolution, Eliza is confident in her brilliant husband and in her role as his helpmate. But it is in the aftermath of war, as Hamilton becomes one of the country’s most important figures, that she truly comes into her own.

In the new capital, Eliza becomes an adored member of society, respected for her fierce devotion to Hamilton as well as her grace. Behind closed doors, she astutely manages their expanding household, and assists her husband with his political writings. Yet some challenges are impossible to prepare for. Through public scandal, betrayal, personal heartbreak, and tragedy, she is tested again and again. In the end, it will be Eliza’s indomitable strength that makes her not only Hamilton’s most crucial ally in life, but his most loyal advocate after his death, determined to preserve his legacy while pursuing her own extraordinary path through the nation they helped shape together.

I do not typically read Historical Romance but the subject matter, era and the notable characters sparked my interest. There is also the fact that I hadn’t read a story by Susan Holloway Scott yet and I’ve heard about her stories and wanted to give it a try. As an enthusiast of American History, I have to admit, I originally decided not to read any historical fiction books about Hamilton for reasons I won’t go into here today. Since the story is written in another person’s point of view-his wife-I had to see how the author portrayed Hamilton in this light.

Alexander Hamilton, is an important figure in our history and has certainly has had the spotlight of late. He served under George Washington during the American Revolution and was the first Secretary of the Treasury in this new Country. He was intelligent, visionary and had high goals for his life and country. But what about his personal life and his relationships with the people around Him? That is what I wanted to read more about.

Elizabeth Schulyler Hamilton was the daughter of a wealthy War General and whose family was high regarded. She grew up in the comfort and well-being of her parent’s household. History tells us she was a woman of strong character and kindness.

In I, Eliza Hamilton, Eliza and Hamilton’s relationship grew quickly as I can imagine it did in real life and you get a real sense of how it could have been. I hung on to ever word for the first half of the book and was truly in awe over the prose. Beautiful writing and I really felt like I was transported back in the period. The portrayal of Hamilton was an interesting one. I’m still undecided how I truly feel about him. In this story, I really don’t feel I got a sense of his greatness as I thought I would but I did get a sense of the man he was in his personal life. For me that was interesting to see the contrast between the two.

I will admit that a little over half way through I was starting to run out of steam a bit. Eliza was getting on my nerves and I felt things were getting a bit repetitive-if you will. I put the story aside for a few days before picking it up again to finish and I was able to finish it. I had serious doubts I wasn’t going to be able to finish the book, which bothered me since this story is beautifully written. I rallied on and took some time to gather my thoughts about the story as a whole. I believe this story could have been shorten a bit and scenes left out. I also wanted to see some of the other characters role in the story expanded a little. Having said that all this, overall, I am glad I chose to read the book.

I have rated this story three stars.

I obtained a copy of this book from the publishers through NetGalley for my honest opinion.

The heroism of the females of the American Revolution has gone from memory with the generation that witnessed it, and nothing, absolutely nothing, remains upon the ear of the young of the present day. — Charles Francis Adams 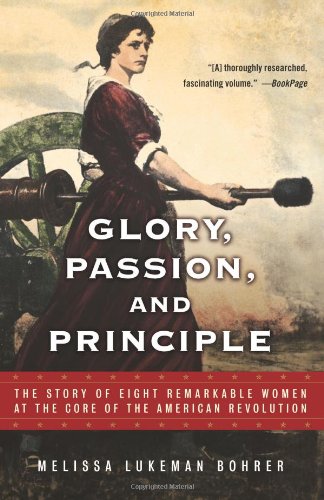 The Story of Eight Remarkable Women at the Core of the American Revolution:

John Adams, Thomas Jefferson, Benjamin Franklin — these are the names we typically associate with the American Revolution. But was American History solely written by men? Were there no influential women? No women who had an impact on the founding of America in its crucial, formative years, in its fight for independence? Indeed, there were — although their contributions have been overlooked or ignored for over two hundred years. Until now.

Glory, Passion, and Principle is an extraordinary journey through revolutionary America as seen from a woman’s perspective. Here are the lesser-known stories of eight influential females who fought for freedom — for their country and themselves — at all costs. Whether advising prominent male leaders in political theory (Abigail Adams), using their pens as swords (Phillis Wheatley, Mercy Otis Warren), acting as military spies (Sybil Ludington, Lydia Darragh), or going to battle (Molly Pitcher, Deborah Sampson, Nancy Ward), these women broke free of the limitations imposed upon them, much as our forefathers did by resisting British rule upon American soil…and laying the groundwork for the United States as we know it today.

My thoughts on the premise, title and cover jacket:

Often times throughout history, women were overlooked in the roles they played and the impact they had. It’s writers like, Melissa Lukeman Bohrer who bring to light strong women in our history. For those of you who have studied in-depth about the American Revolution, you know the part many women were involved in. Which was a big part! Glory, Passion, and Principle honors women mentioned above in the book description.

The title of the story REALLY stands out to me. Glory, passion and principle were among the strong traits of people during that time who had a belief in freedom, a pursuit of happiness of faith, family, and their country.

What can I say about the cover? It speaks for itself in many ways. Look how the woman is standing strong and showing her fight for the cause she believes in. I love the richness in the colors used and dramatic feel. The cover really gives you a sense of the period. Nicely done.

Cover Crush is a weekly series that originated with Erin at Flashlight Commentary.Be sure to check out her latest cover crush by clicking on the link provided.

Take a look at these other great book bloggers who cover crush:

More cover crushes over at indieBRAG!