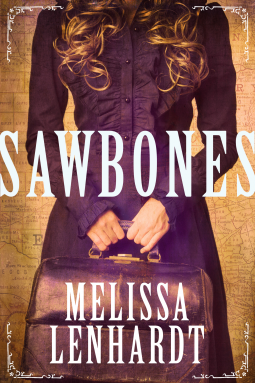 When Dr. Catherine Bennett is wrongfully accused of murder, she knows her fate likely lies with a noose unless she can disappear. Fleeing with a bounty on her head, she escapes with her maid to the uncharted territories of Colorado to build a new life with a new name. Although the story of the murderess in New York is common gossip, Catherine’s false identity serves her well as she fills in as a temporary army doctor. But in a land unknown, so large and yet so small, a female doctor can only hide for so long.

I am really not all that interested in reading westerns. I never have been but when I saw this book and the title, it grabbed my attention. It really struck a cord with me.

Now, I feel the book description needs to be expanded on. Though even with writing this review, I was trying to work out how to pull what was not mentioned into the my review without giving spoilers.

SAWBONES is a story you can talk about in several different ways. That is how diverse the themes are in the story. Having said that, those themes all come together and in such a dramatic way. The author did an incredible job with that. I was spell bounded.

First I’d like to mention a notable historical character in the story. William Tecumseh Sherman served as a General in the Union Army during the American Civil War. After burning everything in Georgia and the burning of Atlanta, I really didn’t care learning much about him after that particular information in our history. Though many people found him as an outstanding commander, I found his policies and actions deplorable. Though he plays a small roll in SAWBONES, his larger-than-life presence makes a big impression on me. Also, it was really interesting because I did not know anything about his tours of the Texas Forts after the Civil War. Now, I would like to find out more about that and I have the author of this book to thank for this.

As you will read in the book description, Catherine Bennett is wrongly accused of murder and flees out west to the untamed territories of Colorado and on that journal she experiences yet another life altering moment. Catherine paralyzed with fear, witnesses the massacre of the companions she is traveling with. The author does not shy away from describing the carnage done by the Comanche. This is only the beginning of the tragedies that struck her and the people she loves and conflicts she will witness and endure.

As a female doctor-rare of her time and not widely accepted, she is determined to prove her value and intelligence in a man’s world. I was particular drawn to her achievements of becoming a doctor and how the author portrayed Catherine’s moments of practicing medicine. They are empowering and defining.

There are many other wonderful characters in this story and the author has such a discerning writing style for their value to enrich a story.

SAWBONES had me emotionally invested, and ignited my imagination. The author is truly a gifted story-teller and I look forward to reading more of her work.

I am rating this book five stars and received a copy of this book through NetGalley for an honest review.