The Cover: Such a beautiful cover! Makes one want to walk down that dirt road amongst the flowers and trees over hanging.

The Story: What a great title and fitting to the cover design. I do love reading southern stories and about generations of people’s lives. I’m not really into heavy romance so I hope this one fits the bill for me as far as my reading taste goes. The story sounds great and I am adding this one to my to-read pile! -Stephanie Hopkins

Written in Lauren Denton’s signature Southern style, Glory Road tells the story of three generations of women navigating the uncertain pathways of their hearts during a summer that promises to bring change–whether they’re ready for it or not.

At thirty-eight, garden shop owner Jessie McBride thinks her chances for romance are years behind her and, after her failed marriage, she’s fine with that. She lives contentedly with her fiery mother and her quiet, headstrong daughter. But the unexpected arrival of two men on Glory Road make her question if she’s really happy with the status quo. Handsome, wealthy Sumner Tate asks her to arrange flowers for his daughter’s wedding, and Jessie finds herself drawn to his continued attention. And Ben Bradley, her lingering what-could-have-been from high school days who’s known her better than anyone and whom she hasn’t seen in years, moves back to the red dirt road. Jessie finds her heart being pulled in directions she never expected.

Meanwhile, Jessie’s fourteen-year-old daughter, Evan, is approaching the start of high school and trying to navigate a new world of identity and emotions–particularly as they relate to the cute new guy who’s moved in just down the road. At the same time, Jessie’s mother, Gus, increasingly finds herself forgetful and faces a potentially frightening future.

As all three women navigate the uncertain paths of their hearts and futures, one summer promises to bring change–whether they’re ready for it or not. 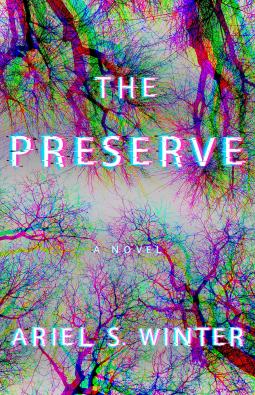 I hope everyone had a great weekend! Today I’m sharing three novels that are on my radar and will be watching closely. I’m extremely interested in the premises and loving the covers!

The Preserve by Ariel S. Winter

The critically acclaimed author of the “bold, innovating, and thrilling” (Stephen King) novel The Twenty-Year Death and the “brilliant” (Booklist, starred review) novel Barren Cove returns with a dark and compelling mystery set in the near future.

Decimated by plague, the human population is now a minority. Robots—complex AIs almost indistinguishable from humans—are the ruling majority. Nine months ago, in a controversial move, the robot government opened a series of preserves, designated areas where humans can choose to live without robot interference. Now the preserves face their first challenge: someone has been murdered.

Chief of Police Jesse Laughton on the SoCar Preserve is assigned to the case. He fears the factions that were opposed to the preserves will use the crime as evidence that the new system does not work. As he digs for information, robots in the outside world start turning up dead from bad drug-like programs that may have originated on SoCar land. And when Laughton learns his murder victim was a hacker who wrote drug-programs, it appears that the two cases might be linked. Soon, it’s clear that the entire preserve system is in danger of collapsing. Laughton’s former partner, a robot named Kir, arrives to assist on the case, and they soon uncover shocking secrets revealing that life on the preserve is not as peaceful as its human residents’ claim. But in order to protect humanity’s new way of life, Laughton must solve this murder before it’s too late.

The Preserve is a fresh and futuristic mystery that is perfect for fans of Westworld and Blade Runner.

I absolutely LOVE this cover and thought about using it for my cover crush series. Isn’t it stunning and so fitting for the premise. I give the cover a five star rating!

Science raises questions only love can answer in this moving and thought-provoking novel from the #1 New York Times bestselling author of “heart-tugging and emotional” (Romantic Times Book Reviews) life-changing fiction.

One frozen embryo. Two families with life-long secrets. And a guy who never planned to fall in love again.

Maddie Baxter West is shaken to the core when she finds out everything she believed about her life was a lie. Her parents had always planned to tell her the truth about her past: that she was adopted as an embryo. But somehow the right moment never happened. Then a total stranger confronts Maddie with the truth and tells her something else that rocks her world—Maddie had a sister she never knew about. Betrayed, angry, and confused, Maddie leaves her new job and fiancé, rejects her family’s requests for forgiveness, and moves to Portland to find out who she really is.

Dawson Gage’s life was destroyed when London Quinn, his best friend and the only girl he ever loved, is killed. In the hospital waiting room, London’s mother reveals that London might have had a sibling. The frozen embryo she and her husband donated decades ago. When Dawson finds Maddie and brings her to Portland, the Quinns—her biological parents—welcome her into their lives and hearts. Maddie is comforted by the Quinns’ love and intrigued by their memories of London, who was so much like her. Is this the family and the life she was really meant to have?

Now it will take the love of Dawson Gage to help Maddie know who she is…and to help her find her way home.

I never get tired reading about this history! Should be interesting. -Stephanie Hopkins

The Legend and Legacy of the Warriors of God

Shrouded in myth and conspiracy, the history of the Knights Templar is little understood. Geordie Torr pulls fact from fiction, revealing the astonishing tale of this military-religious order that dominated the politics of the medieval Middle East.

Initially created to protect Christian pilgrims to the Holy Land in the wake of the First Crusade, the Templars soon became an institution of incredible power, possessing wealth and influence throughout the courts of Europe. Yet just two centuries later they dramatically fell as its members were accused of heresy and burned at the stake.

Set against the dramatic backdrop of the wars between Christians and Muslims, this illustrated book brings to life the legacy of this secretive order and the characters who defined the era.